This much is beyond dispute: Khalid al-Labad is dead. The 26-year-old and two teenage relatives were fatally shot by police on 26 September as they sat on the narrow pavement by their house in this broken-down little town in the far east of Saudi Arabia.

To police, Mr Labad was a violent “menace” wanted for shooting two police officers, killing another man and attacking a police station. To human rights advocates, he was a peaceful protester silenced by the government for demanding equal rights for the country’s oppressed Shia Muslim minority.

The killing of Mr Labad and the two teenagers marks an escalation in Saudi Arabia’s worst civil unrest in years. The sectarian uprising in the kingdom’s oil heartland has been an often overlooked front in the wave of revolts remaking the Middle East. But it has become increasingly violent, and the implications for the region are vast at a time when Saudi Arabia and Iran are jockeying hard for supremacy.

Saudi officials assert that the protesters are nothing more than Iranian puppets bent on destabilising the Saudi economy – a charge the demonstrators vehemently deny.

Shia, who form a majority in Iran, have long been treated as second-class citizens by the ruling Sunni elite in Saudi Arabia. They account for about 10 per cent of the country’s 28 million people and are concentrated here in the Eastern Province’s industrial centre, sandwiched between the vast Arabian desert and the glistening Persian Gulf.

The death toll here – 14 civilians and two police officers since the beginning of last year – is small compared with recent rebellions in other Arab countries, especially the civil war in Syria. And, unlike elsewhere, protesters here are not demanding the overthrow of their government.

They want long-denied basic rights: equal access to jobs, religious freedom, the release of political prisoners. But in the richest country in the Middle East, where even peaceful protests have long been banned, the clashes between police and demonstrators have become a big concern for King Abdullah and his ruling family.

“The government realises it has a major problem here,” said Jafar al-Shayeb, chairman of the municipal council in Qatif, a Shia-majority town close to Awamiya, near the oil wells and office complexes that constitute the hub of an oil industry that brought in $300bn last year.

But the government’s response has largely been to dismiss the protests as illegitimate.

Mansour al-Turki, a spokesman for the powerful Interior Ministry, said in an interview that the Saudi protesters “have connections to Hezbollah”, the Iran-backed Shia militia in Lebanon. Such assertions infuriate supporters of the protesters.

“Show me one person here who has any connection to Iran. Where is the evidence? There is none,” said Waleed Sulais of the Adala Centre for Human Rights, a group formed last year in Qatif to document abuses against Shia.

The government has worked hard to play down the escalation in tensions between the Shia and the Sunni-led government in these waterfront towns, just across a 16-mile causeway from Bahrain. International and domestic human rights groups said the Saudi government had prevented them from entering Awamiya and Qatif, and government censors had occasionally blocked the websites of rights groups.

In three days of interviews in private homes, street corners and government offices, protesters and security officials passionately accused each other of being liars and cold-blooded murderers.

“They lie. They lie a lot,” Yousef Ahmed al-Qahtani, Mr Turki’s deputy, said of the protesters.

Awamiya is a shabby town filled with rutted roads where people scrape together a living fishing or working in small shops. Everyone entering the town must pass through police checkpoints, and police have blocked off main streets with armoured vehicles. The town’s neglect stands in sharp contrast to the gleaming new malls of Damman, the province’s largest city, only 15 miles down the coast.

Last year, King Abdullah announced a $130bn national spending package widely seen as an insurance policy against the arrival of a Saudi Spring. The plan included wage increases for government workers, new rules to make mortgages easier to obtain, a huge expansion of unemployment benefits and plans for 500,000 new homes.

Although the plans were not aimed at Shia specifically, people in this region benefited, and a new housing project is planned for Qatif. Mr Shayeb, the Shia official, said the spending “helped divert people’s attention from revolt” but did not erase the underlying anger.

Shia have demanded an end to discrimination in employment – few top-level government jobs go to them. They want more freedom to build Shia mosques and religious community centres, which are banned in many areas. They want more development in towns that appear run-down and neglected. And they want the release of Shia political prisoners, many of whom have been held without charge or trial for months or years.

“If the government would answer some of these demands, people would calm down,” said Ahmed al-Meshaikhes of the Adala Centre.

Instead, the Shia have taken to the streets with new resolve. Protests occur almost weekly. The marches can be a few dozen protesters carrying photos of the dead and shouting anti-government slogans, or hundreds of people taking over main boulevards, as they did after the recent funerals for Labad and the two teenagers. They have also burned tyres, tossed molotov cocktails and, both sides agree, sometimes shot at police.

At first, the Saudi government responded cautiously. In January, it issued a list of 23 most-wanted suspects, including Mr Labad, and said it would give them time to turn themselves in. Only a handful did.

But more recently, police and protesters both appear to be turning more violent. Officials from Human Rights Watch and Amnesty International accuse the Saudi government of systematic human rights abuses in its treatment of the protesters. Government officials denied the allegations. Mr Turki said security officials had handled the protests, which he called “riots”, with professional restraint.

He said that Awamiya had typically seen much gun and drug crime, and that 32 officers had been shot since the protests began. Two of them were killed.

Mr Sulais said the police were simply obeying government orders to crush demands that the Sunni leaders would rather not hear. He said his group had documented the shooting of 71 protesters, including 14 killed. Since last year, he said, police had arrested 723 people, and 162 of them were still jailed, including 61 children as young as 14.

Both sides accuse the other of inflating the figures, and no independent tally exists in a country where government records are not public.

The killing of Mr Labad and the two teenagers hangs over Awamiya. In Mr Labad’s house, a warren of small rooms where several families live, more than 20 family members sat on the floor in a room beneath photos of Mr Labad and Shia religious leaders one recent night. They said Mr Labad and his relatives were unarmed when police opened fire on them, and they were furious at assertions that the dead were criminals.

“We only come out to demand legitimate rights, and they call us terrorists,” said Mr Labad’s sister, Ebtisam al-Labad, 30. “They are afraid of the truth. They don’t want people to speak. They want people to be like sheep.”

The next day, security officials made two wounded police officers available for interviews. One had been shot from behind in the leg in March, shattering his thigh bone. He is still on crutches. The other said he was driving four months ago when a man on a motorcycle pulled up next to his car and shot him three times. His right eye is gone, and his left arm is in a cast and sling.

Both officers said Mr Labad had ambushed and shot them.

“They always say that. ‘That guy is a murderer. That guy is a criminal’, ” said Mr Sulais, the human rights activist. “They can say anything. But where is the evidence?” 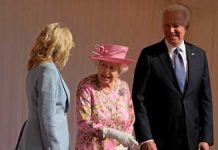 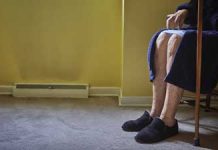 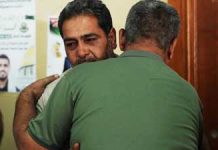