Authorities say four people are dead after a six-hour standoff with police at a townhome in Aurora, Colo.

Aurora Police Sgt. Cassidee Carlson says a suspected gunman was shot and killed when he exchanged fire with officers after hours of negotiations. Three victims — all adults — appeared to have been killed before police were called.

A woman inside the home was able to escape by jumping out a second-story window and alert authorities that the armed man had fired shots inside the home. Before escaping, she said she saw three “lifeless” bodies. She was not injured, police said.

The names and ages of the victims and of the suspect were not released. The Denver Post reported that the victims may all be related.

“We have an idea of who they are, but we obviously want to confirm their identities with the coroner,” said Carlson, who declined to release the relationship between the victims and the shooter.

Next-door neighbor Melissa Wright, a nurse who treated victims of the July movie theater shootings in Aurora, told the Associated Press that she knew the gunman as Sonny Archuleta — a name used by police officers using a bullhorn to try to negotiate with the man. Wright said the townhome may have been inhabited by the gunman, the gunman’s wife, her father and another man.

At 3 a.m., police sent out emergency notifications to residents living near the townhome. Officers closed streets and evacuated neighbors’ homes during the standoff and used a bullhorn to communicate with the gunman, urging him to surrender. Hostage negotiators were also able to speak to the suspect on the phone intermittently for several hours. Police say he was behaving “very irrationally” and often hung up on negotiators.

“After we arrived on scene, there were no more shots fired up until he fired at us,” Carlson said. “During this time he was all over the house. He moved furniture. He was throwing things. He was agitated. He was irrational.”

Police said the timeline of events surrounding the gunfire played out as follows:

— At 8 a.m., SWAT members moved in front of the townhome to break out a window.

— The shooter responded by firing multiple times at police. The bullets struck the SWAT vehicle but did not injure any officers.

— After that, police responded by using tear gas inside the home.

— About 45 minutes later, the shooter appeared in a second-story window and began firing at police again. That time, officers returned fire and hit the suspect, police said.

When officers entered the home, they found the bodies of two men and one woman. Police said they found a fourth body — the shooter’s — upstairs.

“I’ll be honest with you, I’ve never been so scared in my life,” Michael Ignace, a neighbor, said.

“The cops that were standing there [said] he was on methamphetamine,” said neighbor Jennifer Williams. She says the woman who escaped the home provided that information to the responding officers.

Violence put Aurora in the national spotlight in July after a gunman’s bloody rampage inside a movie theater in the Denver suburb left 12 people dead and dozens wounded. That shooting took place at the Aurora Mall, about four miles southeast of the townhome.

Prosecutors will go to court Monday to outline their case against the suspect in the July 20 attack, James Holmes, a 24-year-old University of Colorado graduate school dropout. Holmes faces 166 charges of murder, attempted murder and other charges stemming from the July 20 shootings. 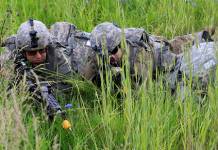