The Bahraini opposition bloc al-Wefaq has condemned a court decision upholding prison terms for 13 pro-democracy activists, including eight life sentences.
On Monday, Bahrain’s highest court rejected the jailed activists’ appeal and upheld their sentences for their roles in anti-regime protests in 2011.
Later in the day, al-Wefaq said in a statement that it considers “the verdict political and [it] reflects the absolute absence of an independent judiciary.”

“The judiciary is being controlled and used by the regime in the political conflict to punish dissidents, and… the revolution must continue,” the statement added.

Al-Wefaq party leader Sheikh Ali Salman also commented on the ruling, saying, “These judgments confirmed the rulings issued before by the military court which were condemned by the whole world. I think it is accurate to call these rulings political persecution.”

In addition, Brian Dooley, director of the Human Rights Defenders Program at the US-based group Human Rights First, stated, “It confirms that the Bahrain regime is refusing to take its chances to reform and seems to be deepening its own human rights crisis.”

After the court ruling, anti-government protests broke out in Bahrain.

The protesters called for the release of all jailed activists and demanded that King Hamad bin Isa Al Khalifa step down.

Since mid-February 2011, thousands of pro-democracy protesters have staged numerous demonstrations in the streets of Bahrain, calling for the Al Khalifa royal family to relinquish power.

On March 14, 2011, troops from Saudi Arabia and the United Arab Emirates invaded the country to assist the Bahraini government in its crackdown on the peaceful protesters.

According to local sources, scores of people have been killed and hundreds arrested.

Physicians for Human Rights says doctors and nurses have been detained, tortured, or disappeared because they have “evidence of atrocities committed by the authorities, security forces, and riot police” in the crackdown on anti-government protesters. 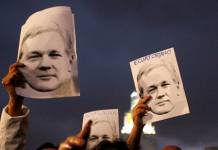