This Wednesday marks the 100th anniversary of the birth of Richard Nixon. Conventional wisdom says Nixon was brought down by Watergate. The reality was that he was undone as much by the divisiveness of the Vietnam years as by any of the marked and material flaws in his character. Distrust of the Washington establishment and of the ugly, costly war into which it had mismanaged America created a polarized, volatile atmosphere. Nixon gave his enemies the sword they needed to undo him and produce the kind of wrenching change the era seemed to demand.

John Kerry and Chuck Hagel are two products of that era. By extension so, too, is their new patron and soon-to-be boss: Barack Obama (even though Nixon’s resignation took place just five days after Obama’s 13th birthday). Obama’s choices for secretary of state and defense, respectively, Kerry and Hagel are both veterans of the Vietnam war, and although one became a liberal Democrat and the other a conservative Republican, both were defined by their Vietnam experience. Both developed a willingness to challenge conventional military wisdom and a desire to avoid more Vietnams in the future.  For Hagel, this ultimately meant breaking with his own party when he saw America’s involvement in Iraq heading in a dangerous direction.

For Obama, whose political bar mitzvah, or coming of age if you will, took place in the America of Vietnam, his career has been largely shaped by the liberal traditions that arose in response to and in the wake of that war. Certainly, that seemed clear during the 2008 campaign, when Obama took the more dovish stance in the primaries versus then-Senator Hillary Clinton. But it has seemed less evident during his presidency, when not only did Obama bring Clinton and Bush Defense Secretary Robert Gates into his cabinet, but he also undertook a number of initiatives that suggested a deviation from that liberal tradition, from redoubling America’s commitment to Afghanistan to military intervention in Libya to a major escalation in America’s use of drone warfare, cyber warfare and special operations to project power worldwide.

The big question surrounding Obama and his second-term national security cabinet is whether the new team will reveal which of the seemingly contradictory impulses displayed by the president in his first term will ultimately be seen as his legacy. Are there clues in these choices that suggest an answer?

Picking liberal Kerry and conservative Hagel, who had a lifetime Senate rating of 85 from the American Conservative Union, might suggest that Obama is at his heart as balanced as his first-term policies seemed to be. Picking two military veterans plus close counterterrorism advisor and 25-year CIA professional John Brennan, architect of the administration’s drone wars, suggests that perhaps the seemingly liberal president is actually a bit of a closet hawk. Perhaps the president who drew GOP contempt for what was seen as his capitulating, cozying-up-to-enemies approach of “engagement” in 2008, is at heart an American exceptionalist tough guy to warm a neocon heart (if neocons had hearts).

But the reality is that for all the differences among the members of this national security team — East Coast liberal Kerry, heartland Republican Hagel, career CIA Brennan, tough, shoot-from-the-lip Susan Rice, strategy-sensitive, process master Donilon — there is one thing that links them all. It is not engagement. It is disengagement.

Even though Hagel voted for in the 2003 invasion of Iraq, his defining stands on international security issues have come when he has-true to his Vietnam-era roots-resisted American intervention and sought to pull the country out of what he saw as costly, unwinnable engagements. Indeed, in terms of Iran policy, one of the things that has critics up in arms about the Pentagon appointment is Hagel’s public resistance to an American military confrontation with that country over its nuclear program. Hagel, Kerry, and other members of the Obama team have all been actively working for the past few years to reduce America’s military involvement in the Middle East to its bare minimum. Even Brennan’s appointment as CIA director should be seen in that context; inside the administration the drone warfare that Brennan has advocated is viewed as part of a “light footprint” strategy in the region that allows America to reach out and touch its enemies with the smallest possible commitment of resources and the least risk.

There is plenty about such approaches to like, particularly when they are viewed in light of the huge costs associated with our catastrophic interventions in Iraq and Afghanistan. And as the United States struggles with domestic economic challenges and looks to benefit from new resource discoveries at home that can lead to greater energy independence, disengagement from the Middle East now seems as much a historical imperative as it is a policy choice.

Indeed, disengagement is only a problem if it does not come simultaneously with new forms of engagement. The void created by withdrawing American hard power from the Middle East and other global trouble spots will collapse on us and cause great unrest if it is not filled with something else. Here, the president’s 2008 focus on engaging enemies and his administration’s increased reliance on restoring old alliances damaged during the Bush years and identifying new ones, especially with emerging powers from Turkey to India to Southeast Asia, is an encouraging sign. Kerry’s own impulses toward diplomacy of a more traditional kind suggest that Obama’s second-term national security team may indeed cement this kind of legacy for him, allowing him to be remembered as a president who made America strong again through cultivating friendships rather than flexing our muscles.

That said, this does represent a shift that will be materially different for allies like Israel that have depended on the threat of the use of force from the United States as one of their own foreign policy’s primary tools. Choosing a guy like Hagel, who has sought with too little grace but with reasonable attention to America’s real national interest to shrug off the influence of the Israel lobby, should not necessarily be seen as the reason Israel should be concerned. It is not up against one man with rogue views. The president will set his own policies. Hagel will work for him. But Israel is up against history and it ought to be focused on finding a way to ensure its security in the roiling environment of its tumultuous region based on an expectation that the America of tomorrow will not act precisely as the America of yesterday did.

Nixon broke the law. He was a paranoid, deeply flawed leader. He also certainly oversaw some of the most significant foreign policy successes of any president over the past 50 years. Not only did he ultimately get America out of Vietnam, he empowered his foreign policy team to reach out and cultivate new relationships with the era’s other great powers, notably Russia and China. The challenges were different. But he was a man who offset military disengagement with active diplomatic engagement. It would be an interesting irony if Obama, Kerry, and Hagel ultimately ended up emulating this underappreciated aspect of the late, not-so-lamented president’s legacy.

Welcome to our self-induced national suicide. The UK is entering the worst and most prolonged recession in living memory

Feds nab Ghislaine Maxwell over sex trafficking for Epstein. Will she now cut a deal and throw sweaty Prince Andrew to the sharks? 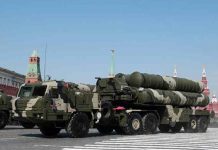 ‘US Believing It Can Buy S-400s from Ankara is Tragicomic’ – Retired Turkish Air Force Maj. Gen.