Arsenal became the last English club to bow out of the Champions League tonight despite a 2-0 second-leg win at Bayern Munich as the Gunners lost their last-16 tie on away goals.

Having beaten Arsenal 3-1 at the Emirates Stadium in the first leg in London three weeks ago, Bayern had been odds on favourites to finish the Gunners off in the Bavarian capital to go into Friday’s quarter-final draw.

Arsenal took the fight to their German hosts with striker Olivier Giroud giving the Gunners an early lead before centre-back Laurent Koscielny netted with 86 minutes on the clock to set up a frantic finish, but the 3-3 aggregate score saw Bayern sneak through.

Much had been made in the build-up of Arsenal’s “Mission Impossible in Munich” with the Gunners needing three goals at Bayern’s fortress-like Allianz Arena, but Arsenal quickly dismissed any notion this tie was already decided.

The game was just three minutes old when Tomas Rosicky found space, Theo Walcott fired in a cross and Giroud drilled his shot into the roof of the net, seized the ball and sprinted back to the halfway line.

It was the first time Bayern had conceded a goal inside the first 15 minutes this season and there were plenty of blank expressions in the Munich ranks.

Bayern responded by playing predominantly in Arsenal’s half, but Rosicky, who took the place of the injured Jack Wilshere behind Giroud, was at the centre of everything the Gunners did with the hosts clearly rattled by the opening goal.

The patience and composure which has left Jupp Heynckes’ side 20 points clear in the Bundesliga suddenly seemed to desert them.

Bayern did begin the second half with intent as both Arjen Robben and Toni Kroos fired wide, while right-winger Thomas Mueller twice forced Arsenal goalkeeper Lukasz Fabianski into diving saves.

Robben let a golden chance go begging with 67 minutes gone when he got in behind the Arsenal defence, but he fired straight at Fabianski.

With 10 minutes left substitute Gervinho came perilously close to adding Arsenal’s second, but the ball harmlessly rolled out of play for a goal-kick.

There was plenty of pushing and shoving in the Bayern goal when goalkeeper Manuel Neuer briefly laid on the ball to eat up a few seconds with the Arsenal players desperate to kick-off again, but the third goal ultimately eluded them.

While Arsenal are the last English team to exit the Champions League, Bayern join Bundesliga rivals Borussia Dortmund in the last eight.

Malaga’s remarkable Champions League campaign continued on Wednesday when they beat Porto 2-0 to progress to the quarter-finals 2-1 on aggregate.

Trailing 1-0 after the first leg in Portugal, Malaga levelled the tie on aggregate when Isco scored with a stunning strike just before half-time.

If that gave the Spanish club confidence, they were left in an even stronger position when Porto had Steven Defour sent off for a second booking shortly after the restart.

And substitute Roque Santa Cruz scored the crucial goal, heading home with 13 minutes left, as Malaga become the third club from La Liga in the quarter-final draw, along with Real Madrid and Barcelona.

Still unbeaten in their domestic league this season, and leading thanks to Joao Moutinho’s solitary strike in the first leg last month, Porto would have been confident of seeing off the challenge of Malaga at La Rosaleda.

Vitor Pereira’s side started strongly, too, dominating possession despite the hostile atmosphere. Malaga had not won a domestic game since losing the first leg in Portugal, and they took their time to come into the contest, but a strong finish to the first period saw them come right back into the tie.

Ten minutes of the opening half remained when Malaga produced their first chance of note, Portuguese left-back Antunes letting fly from 25 yards and forcing a fine save from Helton, who tipped the ball over for a corner.

Little Argentine striker Javier Saviola then thought he had given Malaga the lead on the night when he stabbed home from close range, but his effort was disallowed for a supposed foul by Julio Baptista on Helton.

Replays showed that Baptista was unlucky to be penalised by the Italian referee Nicola Rizzoli, but it was a maybe a sense of injustice that drove the home side to level the tie in the 43rd minute.

Manuel Iturra found Isco, who turned and spotted Helton off his line before whipping a brilliant finish into the top corner from 20 yards.

La Rosaleda erupted as the young playmaker gave another display of the talent that has him earmarked for a glorious career.

But the moment that really tipped the balance the way of Manuel Pellegrini’s side came four minutes into the second half, when Porto’s Belgian midfielder Defour was dismissed.

Defour had already been booked when he went rashly into a challenge on Joaquin, and Rizzoli produced a second yellow card.

The tension was now palpable, with Porto knowing that an away goal would leave Malaga staring at elimination.

But the hosts sensed blood against the 10 men, and Santa Cruz was sent on for Baptista to freshen up the attack for the closing stages.

The big Paraguayan needed just three minutes to make the difference, heading low into the net from Isco’s outswinging corner.

Malaga were almost there, but there were still some nervy moments to come for the home fans.

Porto thought they had that all-important away goal when Maicon headed in with 10 minutes to go, but his effort was disallowed for offside.

It was a marginal decision, but the correct one, and Pellegrini’s side held on to take their place in the last eight.

Turkish clubs to have cardboard fans in stands 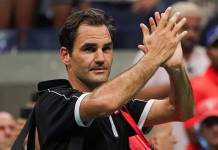 Roger Federer is the highest-paid athlete in the world