Ashley Wagner’s goal for the World Figure Skating Championships was simple, but certainly not assured: She wanted to earn three spots for the U.S. women at next year’s Sochi Olympics.

“Mission accomplished,” she said after her free skate. Wagner and teammate Gracie Gold finished fifth and sixth respectively on Saturday. They needed a combined placement of at least 13 to secure the three spots.

After nearly two years away from competition, Kim skated with lightness and ease to music from Les Miserables. When the music ended, Kim cupped her hand to her mouth, as if even amazed by herself. “I was out of my mind, I don’t know what to say,” she said.

Kostner had the additional challenge of a bloody nose during her free skate to Bolero.

“It was running like a river,” she said. Which is not a good thing to happen, unless skating to Carmen perhaps.

The goal of earning three Olympic spots, as opposed to a spot on the podium, was a telling measure of how far the U.S. women had fallen. Americans owned the podium at the Olympics and the world championships for six decades. From 1956 to 2002, the women won seven Olympic titles and 10 other medals at the Winter Games.

“The American ladies had so many years of dominance,” said Wagner’s coach John Nicks, who has seen it all in his seven decades in the sport. “We’re starting to get back to the good ol’ days.”

The American women hadn’t finished 13th or better at worlds in their previous five tries. Nor has an American woman won a world or Olympic medal since 2006.

Wagner has been driven ever since the 2009 worlds when the U.S. women failed to qualify for three spots in the Olympics for only the second time since World War II. As a result, Wagner missed out on a trip to the 2010 Vancouver Olympics after she finished third at nationals.

“I feel that debt has been repaid. … For us, what we accomplished, with this strong international field, is more than standing on top of that podium,” Wagner said. “The fact that Gracie did it with me her first time out, it’s huge.”

Skating to Samson and Delilah, Wagner, 21, inexplicably fell on a twizzle, a mistake she sometimes makes in practice. After the stumble, she had enough composure to nail her triple flip.

Before Gold, 17, went into her free skate at her first worlds, Wagner passed on a bit of big sisterly advice: “Kick some (butt)!” she told her. “I think she took my advice verbatim and did exactly that.”

Skating to the Life is Beautiful soundtrack, Gold landed seven triple jumps and raced around the rink with abandon. She quickly moved on from mistakes on a triple salchow and double axel. When the music ended, she pumped her right arm with the same gusto as her skate.

“I think we finally have an upward trend with U.S. ladies skating and that’s something to be hopeful and positive about,” Gold said. “Going into Sochi, we’re at that perfect point to start to peak.”

Still, the gap between the otherworldly Kim and everyone else is significant. Queen Yu-na’s reign will likely continue through Sochi.

“Watching Yu-na Kim, when she goes out to skate, that confidence, she looks like she knows that she’s going to hit everything,” said Gold.

All week, Gold had longed to take a picture with her idol. Before Saturday night’s competition, she had her chance. Kim was sitting at a nearby table at lunch. “I chickened out,” Gold said. “I just sort of watched from not afar, but a rather close distance.”

The U.S. women hope to say the same about their shot for an Olympic medal in Sochi. After years of watching from afar, perhaps the distance is closing. 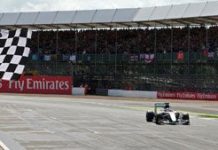