Senior American officials say the United States has planned to launch missile strikes against Syria “as early as Thursday” in order to punish Damascus over the alleged use of chemical weapons.
The unnamed officials told NBC News on Tuesday that the “three days” of strikes would be limited in scope, and aimed at “sending a message to Syria’s President Bashar al-Assad rather than degrading his military capabilities.”

On Monday night, four US warships were deployed in the Mediterranean within cruise missile range of Syria.

American defense officials said if the US wants to send a message to Assad, the most likely military action would be a Tomahawk missile strike, launched from a ship in the Mediterranean.

The US military has beefed up equipment during the past weeks. Several nuclear-powered submarines are reportedly in the water near Syria, also cruise-missile equipped.

The report came one day after US Secretary of State John Kerry accused the Syrian government of using chemical weapons.

Syrian Foreign Minister Walid al-Muallem on Tuesday accused Kerry of lying about the use of chemical weapons by the Syrian government, challenging Washington and its allies to provide evidence.

This is while the UN inspectors are still in Syria to investigate the chemical weapons attacks and they are not scheduled to leave the country until Sunday.

Russia and China have both warned against a US-led military intervention in Syria. Moscow says a military action would have “catastrophic consequences” for the entire region.

Russian President Vladimir Putin told British Prime Minister David Cameron in a telephone call Monday that there was no evidence that an attack had taken place or who was responsible.

Russian Foreign Minister Sergei Lavrov warned on Monday that the use of force without a U.N. mandate would violate international law. 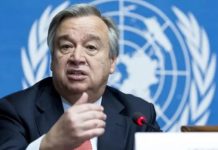