The international watchdog overseeing the destruction of Syria’s chemical weapons announced Friday that it has adopted a program to eliminate the stockpile in the first half of next year, though the plan was dealt a setback earlier in the day when Albania refused a US request to host the destruction.

“The plan provides a clear roadmap,” Ahmet Uzumcu, director-general of the Hague-based Organization for the Prohibition of Chemical Weapons (OPCW), said in a statement. “ … This next phase will be the most challenging and its timely execution will require the existence of a secure environment for the verification and transport of chemical weapons.”

The watchdog said its executive council on Friday approved a “detailed plan” to transport the Syrian government’s chemical weapons arsenal outside of the country and destroy it in the “safest and soonest manner,” but no later than June 30, 2014.

It was not immediately clear, however, where the elimination might take place. NATO member and US ally Albania said Friday it would not allow the destruction to be conducted on its territory, a refusal that follows a similar decision by Norway last month.

Senior OPCW official Malik Ellahi told reporters Friday that he could not name potential host countries but that “obviously there are options and there are ways in which this can be accomplished,” The Associated Press reported.

The plan envisions removing the “most critical” chemicals in the Syrian stockpile by December 31 and all chemical substances declared by the government Syrian President Bashar Assad no later than February 5, 2014, the OPCW said.

The organization said an exception would be made for the the chemical isopropanol, also known as rubbing alcohol, a common household solvent that can be used to make the nerve gas Sarin.

The Syrian government has declared possession of 1,300 metric tons of chemical weapons and more than 1,200 unfilled munitions, a disclosure made under deal brokered by Russia and the United States to seize and destroy the Syrian stockpiles.

The United States and several other countries accuse Assad’s government of being behind an August 21 chemical weapons attack outside Damascus that Washington claims left more than 1,400 dead.

The Syrian government in turn has accused rebel groups it has been battling since March 2011 of being behind the attack, though it agreed to the US-Russian deal to destroy its arsenal.

The deal was struck amid threats by Washington that it would carry out military strikes against Syrian government targets in response to the Aug. 21 attack.

Less Than Half of UK Citizens See Country as ‘Force for Good’ in World, Fresh Poll Shows 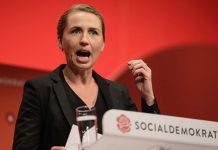