Two diplomatic cables made public by WikiLeaks Public Library on US Diplomacy reveal that Ukraine’s president-elect Petr Poroshenko served as an informant for United States’ State Department. A confidential message from the US Embassy in Kiev dating back to April 29, 2006 mentions the now widely-known confectionary tycoon twice.

Back then Poroshenko reportedly handed to the US Embassy in Kiev inside information on the plotting a coalition government in 2006, Wikileaks say.

The message was intended for Ambassador John Herbst to update him on how things stood in April 2006, Poroshenko describing himself as an insider from the party Nasha Ukrayina (Our Ukraine), a bloc associated with former President Viktor Yushchenko, passionately welcomed by the western leaders.

The diplomat, however, questioned the authenticity of Poroshenko’s message suspecting it to be part of backdoor games aimed at arresting once Yushchenko’s allies – Yuliya Tymoshenko and Aleksandr Turchynov until recently – acting Ukraine’s President.

Who is Poroshenko – the figure to use his might and power to wind down the deadly standoff in the country’s southeast or a mere businessman who skilfully pulls his strings – is still debated.

Other Wikileaks documents that came recently to light show that Ukraine’s former Prime Minister Yulia Tymoshenko might have cooperated with mafia boss Seymon Mogilievich when she headed United Energy Systems.

In a message to Washington dated April 14, 2006, US embassy to Kiev said that Tymoshenko could have been associated with Ukraine’s crime kingpin. The embassy referred to Internet news site Ukrainska Pravda (UP) which reported about the illegal destruction of the Security Service of Ukraine (SBU) files on Mogilievich upon order by then senior Tymoshenko, who could have been thus deleting sensitive data on her shady business with Mogilievich, as well as her illegal surveillance of now president-elect Poroshenko.

Yulia Tymoshenko leapt to international fame in 2004 as she joinedthe so-called Orange Revolution: Ukraine’s citizens took to streets back then in Kiev backing Western-favorite Viktor Yushchenko in his appeal against the results of a presidential election. She served two terms as prime minister under President Yushchenko and narrowly lost to Viktor Yanukovych in the 2010 presidential race. After he came to power Tymoshenko got a seven-year prison sentence for allegedly negotiating a Ukraine-Russia deal on conditions unfavourable for Ukraine. She was released from jail by a parliament decree on February 22, just before the Maidan standoff reached its deadly climax.

It was reported earlier by Wikileaks that US diplomats called the newly-elected president of Ukraine a “disgraceful oligrach,” with his name mentioned no less than 100 times in the secret files. He is generally pictured as an unpopular politician and in the first place businessman who managed to gain strings in whatever government. Sheila Guoltni, US deputy Ambassador to Ukraine, told the US Department of State on May 26, 2006 that the image of Poroshenko was discredited by “credible accusations of corruption” – the issue that at some point led him to a row with ex Prime Minister Yulia Tymoshenko.

Boris Johnson Wants Charity to Pay for Costly No 10 Makeover Supervised by His Fiancee, Report Says 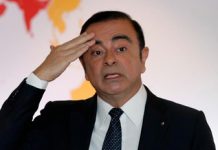