(Reuters) – Ratings firm Standard & Poor’s will pay $1.5 billion to resolve a series of lawsuits over its ratings on mortgage securities that soured in the runup to the 2008 financial crisis, the company said on Tuesday.

The settlement comes after more than two years of litigation as S&P fought allegations it issued overly rosy ratings in order to win more business.

S&P parent McGraw Hill Financial Inc (MHFI.N: Quote, Profile, Research, Stock Buzz) said it will pay $687.5 million to the U.S. Department of Justice, and $687.5 million to 19 states and the District of Columbia, which had filed similar lawsuits over the ratings.

The United States sued S&P in 2013 after initial settlement talks broke down, accusing the ratings agency of defrauding investors and seeking $5 billion in one of the most ambitious cases the Justice Department has fought tied to the financial crisis.

In a 119-page complaint, the government said S&P delayed updates to its ratings criteria and analytical models between September 2004 and October 2007, weakening its criteria in a desire to gain more business from the investment banks that issued the securities.

“It could be structured by cows and we would rate it,” according to an excerpt from an instant-messaging exchange between two S&P analysts that was cited in the lawsuit.

“On more than one occasion, the company’s leadership ignored senior analysts who warned that the company had given top ratings to financial products that were failing to perform as advertised,” said Attorney General Eric Holder said in announcing the settlement.

Under the deal, S&P does not admit to any violations of law.

(Reporting by Aruna Viswanatha in Washington and Neha Dimri in Bengaluru; Editing by Kirti Pandey and Bernadette Baum)

Could A Comeback In Venezuelan Oil Crash The Markets?

Big Oil Aims To Win Back Investors With Green Oil 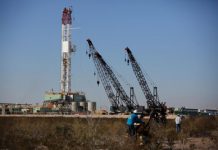