Syria’s army and allied forces, backed up by the Russian Air Force, have launched a major ground operation in the western parts of the country.

“The Syrian army and allied forces began a ground operation in the northern parts of Hama Province … with fire cover from the Russian air force,” a Syrian military source said on Wednesday.

The Syrian military source went on to say that the operation in Hama would target “the edges of the villages of Latmeen, west of Morek, in preparation for heading towards Kafr Zeita.”

It is said that a range of militants, including terrorists from the al-Qaeda-linked al-Nusra Front, are active in the area.

“The Syrian army in its latest operations is working on cut off the southern parts of Idlib Province from the northern parts of Hama Province,” another military source in Hama, which borders Idlib, added.

Meanwhile, Syrian official news agency, SANA, quoted a military source as saying that the Russian Air Force, in cooperation with the Syrian Air Force, conducted strikes against Daesh targets in Deir Hafer and al-Bab in the countryside of the northern province of Aleppo.

The military source added that many terrorists were killed in the joint operation.

Earlier in the day, Russia’s President Vladimir Putin said the country’s Air Force, which has been bombing the positions of the militants in Syria, would support Syrian government forces fighting on the ground.

Moscow began its military campaign against terrorists in Syria on September 30 upon a request from the Damascus government, shortly after the upper house of the Russian parliament gave Putin the mandate to use military force in Syria.

‘That Was Litigated’: Psaki Grilled on Sexual Harassment Claims Against Biden Amid Andrew Cuomo Row 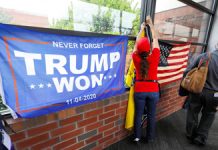