Kabul welcomed the US decision to keep thousands of troops in Afghanistan past 2016, vowing to respond to a resurgent Taliban “with full force” even as the rebels promised to wage jihad until the last American soldier leaves.

President Barack Obama’s decision Thursday to keep a 9,800-strong US force in Afghanistan through much of next year came as he admitted that Afghan forces were not ready to stand alone.
Calling the plan “the right thing to do,” Obama acknowledged “Afghan forces are still not as strong as they need to be.”
“As commander in chief, I will not allow Afghanistan to be used as a safe haven for terrorists to attack our nation again,” he said in a televised address.
Afghanistan’s President Ashraf Ghani welcomed the decision, saying in a statement late Thursday that his government “will respond to fear and terror with full force,” but adding that it will keep “ajar the door to peace.”
On Friday, he visited troops in northern Kunduz city, which was briefly captured by the Taliban in an offensive launched last month, which was the insurgent’s greatest military victory since 2001, sending shockwaves through the country.
“I take pride in you, thank you for your sacrifices and for your patriotism,” he said at a ceremony where he issued medals for bravery for those involved in retaking the provincial capital.
Intense fighting has spread in recent weeks to other parts of the country, underscoring the continued role of US troops in training the still fledgling Afghan forces and conducting vital counterterror operations.
Just this week the NATO coalition said US and Afghan forces had carried out one of their largest joint operations in southern Kandahar province, dismantling a major Al-Qaeda sanctuary in the Taliban’s historic heartland.
The Taliban responded to the US announcement saying they would keep fighting until American troops finally pull out.
“They were the ones who decided to invade Afghanistan. But it will be us who decide when they leave,” said Taliban spokesman Zabiullah Mujahid.
“When the attacks continue to mount on the occupiers and when they see they have to spend more money in their meaningless war, they will be forced to change their oppressive policy. Our jihad will continue until the last occupier is expelled,” he said on Thursday.
Regional security analyst Imtiaz Gul cautioned against linking the extension of US military presence to the fall of Kunduz, saying negotiations between the two countries had been going on for several months.
“It was based on ground realties as Afghan security forces are still weak, the unity government is not stable,” he said.
“There is a resurgence of the Taliban after the death of Mullah Omar and they have galvanized around Mullah Mansour,” he added, referring to the group’s founder and its new leader.
Coming to office in 2009, Obama had pledged to end the wars in Iraq and Afghanistan, but more than six years on, thousands of troops remain in both countries.
The Afghan war in particular has cost more than 2,000 US lives and wounded and maimed tens of thousands.
The US decision to invade in 2001 was prompted by the Taliban’s refusal to surrender Al-Qaeda leaders including Osama Bin Laden after the 9/11 terror attacks.
Under previous plans for Afghanistan, the United States would have reduced its troop numbers by the end of 2016 from about 10,000 currently, to about 1,000.
But now, by late next year or early 2017 when Obama steps down, their numbers are expected to remain at about 5,500.
Obama stressed the troops would not have a combat role, and would instead maintain their focus on training and counterterrorism. 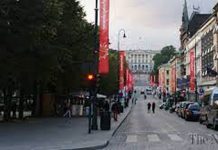 Norway Now Has Fewer Deaths From COVID-19 Than Ordinary Flu