Kiev says Russia’s ban on Ukrainian products undermines the World Trade Organization rules, and plans to raise the issue at a WTO meeting in February.

In December, Russian President Vladimir Putin signed a decree to suspend the free trade treaty with Ukraine, starting this year. He said Kiev’s move to open its borders to the EU compromises Russian interests and economic security. Moscow is concerned that without such a barrier, Ukraine could illegally supply embargoed European goods to Russia.

The Kremlin also banned food imports from Ukraine in response to the country joining anti-Russian sanctions.

Ukraine introduced retaliatory sanctions against Russia for a number of goods and intends to expand the list.

According to Russian Economic Development Minister Aleksey Ulyukaev, measures from Moscow do not violate WTO rules.

Russia also changed transportation rules for Ukrainian goods exported to Kazakhstan through Russia. Ukraine must now transport goods to Belarus in sealed containers. The freight must have GLONASS navigation system installed when the goods enter Russia. The tracking system is to be removed as soon as the cargo leaves the territory of Russia.

Kiev insists that as a result, all Ukrainian exports through Russia have been halted. This seriously complicates Ukraine’s exports to Central Asia. Last week, Kiev announced it will try to deliver the goods bypassing Russia through the Black Sea to Georgia and the Caspian Sea to Azerbaijan.

“This week we will launch a pilot shipment Ukraine – Georgia – Azerbaijan – Kazakhstan, which is an alternative way of supplying the Ukrainian goods to Asian countries, where they have always been present,” said Prime Minister Arseny Yatsenyuk.

According to Kiev’s Minister of Economy and Trade Aivaras Abromavicius, who was granted Ukrainian citizenship in December 2014, Ukraine doesn’t intend to halt transit of Russian goods through its territory. 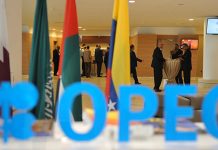 Is OPEC Finally Making Progress Towards An Oil Output Deal?