The field for Iran’s parliamentary election on Friday has narrowed sharply with more than a fifth of the candidates pulling out, apparently urging voters to back the main political lists instead.

The head of the interior ministry’s election headquarters, Mohammad Hossein Moghimi, said on Thursday that 4,844 hopefuls would contest the 290 seats, meaning 1,385 candidates have withdrawn.

Polls will open at 0430 GMT and are scheduled to close at 1430 GMT but voting could be extended if required, Iranian media quoted him as saying.

“It now leaves around 17 people competing for each parliamentary seat,” Fazli said.

“Ten percent of the total candidates are women,” he added, a figure that amounts to a cut of about 100 female candidates, leaving some 500 still running.

Iranian politics is dominated by factions rather than political parties and Friday’s poll will see conservatives up against moderates and reform-minded candidates on a series of lists.

A pro-government List of Hope comprising moderates and reformists is supporting President Hassan Rouhani, a moderate who is looking for his allies to make gains against conservatives.

The main conservative list is headed by Gholam-Ali Hadad Adel, a former parliament speaker, whose daughter is married to one of supreme leader Ayatollah Ali Khamenei’s sons.

Election results from outside Tehran are expected within 24 hours of the close of polls but the count in the capital, which has a population of 12 million and is electing 30 lawmakers, will take three days.

For the first time, voting will also take place on the same day for the 88 members of the Assembly of Experts, a powerful committee of clerics that will choose Iran’s next supreme leader.

Fazli said the number of candidates in that ballot had also fallen, from 161 to 159. 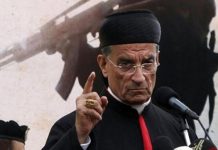