The Kremlin possesses air-to-air missiles which match American ones, just not very many

While Russia has deployed advanced warplanes to Syria including the Sukhoi Su-30SM, Su-34 and Su-35S, those jets are seldom seen carrying Moscow’s latest air-to-air weapons.

It is only on occasion that Su-35S Flanker-E fighters are spotted with active-radar guided R-77 RVV-SD missiles — which are roughly the equivalent of the American-made Raytheon AIM-120 AMRAAM.

The reason Russian fighters are seldom spotted with advanced air-to-air weaponry are two-fold, explained researcher Mikhail Barabanov, editor-in-chief of the Moscow Defense Brief, which is published by the Center for the Analysis of Strategies and Technologies.

One reason is that Vympel R-77 RVV-SD missiles are still comparatively rare in Russian air force service. The second reason is that the Kremlin does not consider an air-to-air confrontation with U.S. and allied forces to be likely.

“In the Syria RVV-SD missiles are used on Russian A.F. planes, but again, due to resource savings, not always. Rather, they are hung to show others — the USA and Turkey — that they have them,” Barabanov said.

“Why do they not hang them permanently? The Russian A.F. obviously does not believe in the possibility of confrontation with the United States in the air. So why waste resources on bogus threats?”

While the Russian air force possesses active-radar homing missile technology, it only has a small number of those weapons in service. Barabanov said:

“The RVV-SD missiles are just beginning to reach de facto initial operational capability in the Russian air force — it is necessary to provide training, etc. As with all aircraft missiles, the RVV-SD is a limited resource in terms of the number of takeoffs and landings onboard an airplane. At the end of this limited resource, it is necessary to send a missile to be repaired for life extension. Therefore, during peacetime, flying airplanes with expensive new missile[s] does not make sense.”

Because Russia does not have vast stocks of RVV-SD missiles in service and its perception that the United States does pose a likely threat, Moscow is making use of the vast arsenal of R-27 missiles it inherited from the Soviet Union.

“The Russian air force has vast numbers of old R-27 family missiles in warehouses — a resource which also expires. Therefore, they do not regret using those and actively fly with them in peacetime,” Barabanov said.

While the Soviet Union developed the original variant of the R-77 during the 1980s, the Russian air force did not buy that version of the weapon following the collapse of the USSR due the lack of funding. However, Vympel did develop a less capable export variant of the R-77 called the RVV-AE, which it has exported to a number of countries around the world.

“The R-77 (Izdelie 170) missiles started serial production in the Kiev ‘Artem’ plant [in what is now an independent Ukraine] in the late 1980s with an initial batch of 200 missiles, all of which have long been used for tests in the Soviet/Russian A.F. This missile is no longer relevant because of its obsolescence,” Barabanov said.

“The Russian developer of this missile — Vympel in Moscow — has since the late 1990s serial produced an export version of this missile under the designation RVV-AE using foreign components and with reduced performance. The Russian air force does not buy the RVV-AE missile.”

It wasn’t until the early 2000s that Russia resumed development of a R-77 variant for its own use.

“For the Russian air force, since 2000, Vympel — now KTRV Corporation — developed a new version of the R-77 missile under the designation RVV-SD (Izdelie 170–1),” Barabanov said. “The first contract for their purchase was signed by the Ministry of Defense of Russia in 2009 — along with the first contract for the Su-35S fighters.”

But it was not until 2011 that the Russian air force received its first RVV-SD missiles — and the service does not yet have enough of the new weapons in its inventory.

“Deliveries started around since 2011,” Barabanov said. “Since then, there were two major contracts for the RVV-SD missiles — in 2012 and in 2015 — with the last being worth 13.175 billion rubles with delivery expected in 2016–2017. With that purchase, there is now a sufficiently large number of RVV-SD missiles.”

This article originally appeared at The National Interest. 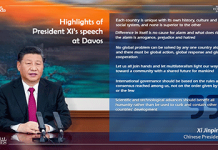 China has no time for complacency: Global Times editorial