By Stephen McDonell BBC News, on the outskirts of Wukan

They came at three o’clock in the morning and started smashing in doors to arrest those seen as leaders but it was never going to be straightforward for the Chinese authorities to retake Wukan.

The footage sent out to media outlets, including the BBC, appears to show a street battle that came with the breaking of dawn.

This has been a Chinese community like no other – with a sense of pride in having chosen its own government, with a track record of having toppled what they saw as a corrupt administration. They believe that if you struggle you can win.

But this time the force against them is overwhelming.

Large teams of riot police move in formation: shields above their heads; shields to the front. They are met with a hail of bricks and retreat.

They fire on the villagers using rubber bullets and tear gas.

There are photos: old people, villagers, who’ve protested in the streets for months, now seen with blood pouring from their heads.

The Wukan model of village democracy is dead.

Local officials had given these people until the end of last weekend to stop demonstrating.

They have been in open rebellion here since June when their elected Communist Party Secretary, Lin Zuluan, was taken away to face bribery charges.

Last week he was given a three-year jail term but the people who voted for him believe he has been framed in order to prevent him from organising their campaign to recoup the money they say is owed for their stolen village land.

Five years ago Wukan came to international prominence when its people overthrew their local government, claiming it was corrupt.

A protracted blockade ended when the Guangdong party chief offered them a deal. They could elect their own village council if they pulled down the barricades and that’s exactly what they did.

It was seen as a visionary move, offering hope to other Chinese villages that they too could chose their governments. But the mood in China, under President Xi Jinping, is now very different.

Three months ago Lin Zuluan had threatened to bring his people back out on to the streets. For years they had failed to get any traction in their stolen land campaign. He had hoped to put the pressure back on, so that those above might track down and hand back the money.

Instead Lin Zuluan was arrested.

His people did return to the streets but the focus of their campaign became the release of their leader.

Day in, day out they’ve been marching.

When we reported from here in June it seemed as if just about everyone in the village was involved in the protests – from high school students right through to old fishermen and shopkeepers. The level of political organisation was remarkable.

Every day we waited for the hard men to come in and crush this movement but they never did.

However, once Lin Zuluan was sent to jail, regional officials clearly decided that this mass dissent must be brought to an end.

They issued a written warning to the people of Wukan: time to stop or face the consequences.

As I write, the village is under the control of the authorities and its people are scared.

“I think what the government is trying to do is arrest dozens of people to see if the rest of us dare to continue protesting,” one man told the BBC. He went on: “Now I can hear on the loudspeakers they’re urging suspects they name to turn themselves in.”

“Riot police are stationed at the entrance to our village,” one woman said. “No-one can go in or out… I see no hope at all in this. The villagers are all very angry.”

The Public Security Bureau in the town of Lufeng, which overseas the area, says it has taken this action to restore stability to Wukan.

In a statement it said some village leaders “continue to fabricate rumours and deploy measures such as threats, insults, force and bribes to instigate, to plan and to launch mass gatherings”.

It adds that “this has disturbed public order including local traffic, school, fishery production and the business of local shops, posing a negative social influence”.

China’s state run newspaper, the Global Times, has also quoted a government official from Shanwei City as saying that all of the “legitimate demands” of Wukan’s villagers have been addressed already. He said some land hand been returned and that other claims had no legal merit.

The so-called Wukan experiment was probably always going to end this way. That it had not already was truly rare in China – yet it doesn’t make the brutal crushing of these people’s aspirations any easier for them to accept.

They’re afraid about what is going to happen to them next. 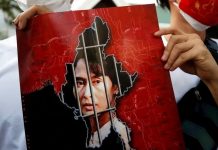