Who has the best temperament for having their finger on the nuclear button? Whose judgment will get the US out of its financial woes? Here are the first presidential debate’s top moments that made Americans laugh, cry or book their next flight to Canada.

No, the historical political spectacle did not touch on immigration, health care or climate change, but there were plenty of other subjects that made Donald Trump and Hillary Clinton go nuclear. Incidentally, the end of the world was implied, creating one the most memorable moments of Monday evening.

“A man who can be provoked by a tweet…”

She went there! Former Secretary of State Clinton traded barbs with Trump over who had the best “temperament,” the word of the night it seemed, to handle the job of president. Clinton zinged Trump on this one. ‘Big league.’

“And in fact, his cavalier attitude about nuclear weapons is so deeply troubling,” she said. “That is the number one threat we face in the world, and it becomes particularly threatening if terrorists ever get their hands on any nuclear material.”

“So a man who can be provoked by a tweet,” she continued, “should not have his fingers anywhere near the nuclear codes, as far as I think anyone with any sense about this should be concerned.”

Trump would have his ‘huge’ moments too, but one of the more sharp distinctions he drew was not against Clinton, but moderator Lester Holt. Trump is campaigning against the establishment, which includes the mainstream media, so a moment like this was not surprising, except for its detailed nature.

“Now whether or not in a place like Chicago you do stop and frisk, which worked very well, Giuliani is here, worked very well in New York,” Trump mused. “It brought the crime rate way down, but you take the gun away from criminals that shouldn’t be having it.”

“We have gangs roaming the streets, and in many cases, they’re illegally here, illegal immigrants,” Trump said. “And they have guns, and they shoot people. And we have to be very strong, and we have to be very vigilant. We have to know what we’re doing. Right now our police, in many cases, are afraid to do anything. We have to protect our inner-cities, because African-American communities are being decimated by crime – decimated.”

That’s when Holt exercised his prerogative.

“Your two minutes expired, but I do want to follow up,” the NBC News anchor said. “Stop-and-frisk was ruled unconstitutional in New York, because it largely singled out black and Hispanic young men.”

“No, you’re wrong,” Trump shot back. “It went before a judge, who was a very against police judge. It was taken away from her, and our mayor, our new mayor, refused to go forward with the case. They would’ve won on appeal. If you look at it, there are many places throughout the country where it is allowed.”

As far as the crime rate goes, Trump supporters tweeted out statistics to back up their candidate. While a screenshot purportedly shows the NYPD recording an uptick in crime over the last two years, the same image also shows a decrease in crime from 2015 to 2016.

“Nobody feels sorry for [Rosie]…”

Trump shocked many during a Republican primary debate when he shut down Fox News’ Megyn Kelly by defending negative comments he has made about women as things he only said about Rosie O’Donnell. It got laughs then, but not on Monday night when he again invoked the former co-host of The View.

“Hillary is hitting me with tremendous commercials, some of it set in entertainment, some of it said – somebody who has been very vicious to me, Rosie O’Donnell. I said very tough things to her, and I think everyone would agree that she deserves it and nobody feels sorry for her.”

The longtime Trump-O’Donnell rivalry lives on, as O’Donnell herself took to Twitter to exclaim, “HE WILL NEVER BE PRESIDENT.”

Trump eventually got back around to jabbing Clinton.

“I was going to say something extremely rough to Hillary, to her family, and I said to myself, I can’t do it. I just can’t do it,” Trump said, adding, “The only gratifying thing was, I saw the polls came in today, and with all of that money, over $200 million [Clinton] spent, and I’m either winning or tied, and I’ve spent practically nothing.”

“Someone sitting on their bed that weighs 400 pounds, OK?”

Clinton walked right into this next one, but Trump may not have exactly hit the right target. It started when she brought up Russia and cybersecurity.

Trump pounced, “I don’t think anybody knows it was Russia that broke into the DNC.”

“She keeps saying ‘Russia, Russia, Russia,’ and maybe it was,” he continued. “It could be Russia, but it could be China, could also be lots of other people. It could be someone sitting on their bed that weighs 400 pounds, OK?”

“We learned that Bernie Sanders was taken advantage of by your people, by Debbie Wasserman Schultz,” Trump said.

A burn, yes, but dropping the ball on an opportunity to delve into Clinton’s own email hack problems? Some thought Trump, well, choked.

“The only secret is that he has no plan…”

On to the other greatest threat the US faces: Islamic State (IS, formerly ISIS/ISIL). It seemed that on this topic, both candidates had their one-liners in the chamber and ready to fire. Trump went first, but Clinton drew blood too. And that’s when things got weird.

“Just go to her website. She tells you how to fight ISIS on her website,” Trump said. “I don’t think General Douglas MacArthur would like that too much.”

“Well, at least I have a plan to fight ISIS,” Clinton replied, smiling.

“No, no, you’re telling the enemy everything you want to do,” the billionaire businessman said.

“No, we’re not,” the unfazed former top diplomat returned.

“See, you’re telling the enemy everything you want to do,” Trump repeated. “No wonder you’ve been fighting ISIS your entire adult life.”

Quite a comeback. Shooter McGavin would’ve been impressed.

“Fact checkers, get to work!” was all Clinton could, or needed, to say.

She did later add, however, “He says [he has] a secret plan, but the only secret is that he has no plan!” 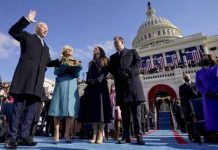 Biden takes the helm, appeals for unity to take on crises