The ballot for Russia’s lower house, delivered the expected result, a landslide for Putin’s United Russia.

He outlined the aims of the Duma, such as boosting investment and defence strategies as well as the need to be strong:“Every individual and every country have the same rights, the right to be powerful, but we don’t think that being a superpower gives us the right to tell people what to do and we don’t do that,” he said.

Not everyone agrees Communist Party leader Gennady Zyuganov, whose party under performed in the poll, is critical of Putin:“We will be going into the presidential election with an understanding that the previous ten years of the current politics has led to six years of hardship, increasing poverty rates, growing military danger and the loss of influence that we once had.”

Putin’s speech comes as relations with the West deteriorate over the conflict raging in Syria and the situation in Ukraine.

Erdoğan to unveil timetable of Turkish economic reforms this week 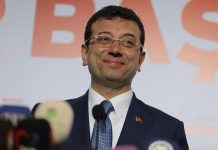