The conflict in Syria is part of Washington’s prime goal to impose global hegemony, President Bashar Assad told a Russian newspaper. Terrorists in Syria, he said, are being used by the US and its Gulf allies to assert control over the region, primarily to weaken Iran.

Stating that the West and especially the United States never stopped the Cold War mentality in pursuit of world dominance, even after the collapse of the Soviet Union, Assad said that global tensions, especially when it comes Syria, are escalating into World War III.

“The whole issue is about keeping the hegemony of the Americans around the world, not allowing anyone to be a partner on the political or international arena, whether Russia or even their allies in the West,” Assad said in an interview with Komsomolskaya Pravda.

While one is yet to see a full-blown clash between the world biggest military powers, Assad stated that the struggle is partly manifested in military confrontation, as seen in Syria, while other strands of the tensions revolve around the issues of “terrorism and security,” as well as “political” outlook.

In the Syrian conflict, the US is using terrorists to achieve its own and its allies’ objectives in the wider Middle East, the main goal of which is to weaken Damascus’ regional ally – Iran. In 2011, when the Syrian conflict began, world powers were negotiating with Iran over its atomic enrichment program.

“It was the main issue around the world, and Syria has to convince Iran to go against its interests, that time. France tried, Saudi Arabia wanted us at that time to be away from Iran with no reason, just because they hate Iran,” Assad said, adding that Damascus received offers to that end after the conflict started in Syria.

After the conflict started, the US and its regional allies used the terrorists which, according to Assad, the US created, to push through its agenda.

“The United States has always, since Afghanistan in the early eighties, until this day, they think ‘terrorism is a card we can play. We can put on the table,’” the Syrian president said.

Terrorists which proliferated widely after the fall of Saddam Hussein’s regime in Iraq, were financed and “whitewashed” by the extremist Sunni Wahhabism brand of Islam, exported by Saudi Arabia, he said.

“We all know that the majority of those terrorists belonging to Al Qaeda-affiliated groups, ISIS, al-Nusra, Ahrar al-Sham, and other organizations. They don’t belong to any political movement, they don’t care about any ideology but their own ideology, the Wahhabi Ideology,” Assad said.

It is this threat that Russia is fighting now, Assad said, praising Moscow for its fight against terrorism while demanding nothing in return.

That battle now is now concentrated in Aleppo where jihadists are centered. Denying US-led criticisms that Russia and Syrian air forces are rather bombing the positions of the so-called moderate rebels, Assad emphasized that anyone who holds a weapon is a terrorist.

“Now, most of the world used the word ‘opposition’ about people who carry guns and kill people. You don’t call them opposition; ‘opposition’ is a political term; it cannot be a military term,” he said.

Assad believes there are no “moderates fighting” in Aleppo, saying that all armed groups there “work with al-Nusra in the area that’s controlled by al-Nusra.”

5-yr-old Taseem. Parents brought her in with her intestines hanging out, after she “torn open” in rebel shelling of #Aleppo. She’s stable. pic.twitter.com/QPiygh6Tno

“How can you work in the same area if you are not under the control of al-Nusra? More importantly, many of their members – there are videos and pictures of them celebrating the death of Syrian Army soldiers, they were celebrating on their bodies … In Aleppo, you had fights, and they pictured themselves over the bodies of Syrian soldiers, the White Helmets with al-Nusra.”

But instead of presenting the horrors of Aleppo, Assad said western media is portraying terrorists as “good people who are sacrificing their lives to help the others and children.”

The only way to stop terrorism in short term is to annihilate armed militants, Assad believes, while in the long term focusing on efforts to battle the jihadist ideology.

“If you talk about those fighters, ideological fighters, or terrorists, let’s say, who are fighting our army, the only way is to fight them and kill them. You don’t have any other way. They are not ready for any dialogue, and you don’t have time to make dialogue, you want to protect your citizens, so you have to kill them,” the Syrian leader said. 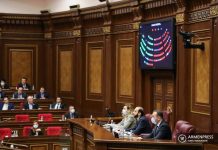