After her speech at the Republican Party convention was panned as possibly plagiarising one of Michelle Obama’s, it’s fair to say Melania Trump has taken a wide berth from all lecterns.

But, it appears she may be returning to oration, after Republican presidential candidate Donald Trump made the surprise announcement his wife would be giving “two or three” speeches as the November 9 election approaches, in the couple’s first joint-interview since his “grab them by the pussy” scandal.

Unfortunately, it was also a surprise to Melania.

When asked if she wanted to “get out there [herself] and help out in the final two weeks”, the former model told Good Morning America host George Stephanopoulos, “we’ll see”. But Donald quickly intervened.

Her response? An I-don’t-think-we-spoke-about-this-before-we-got-on-live-national-television “Oh!”

It’s times like these you need this Danish bus ad: 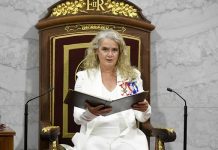