US President-elect Donald Trump has met with potential administration appointees over the weekend. Trump said he would announce certain positions soon.

While he did not reveal whether he made picks for his upcoming administration, Trump said Sunday evening “I think we have some really incredible people going to be working for the country…you’ll be hearing about them soon,” at his golf resort in Bedminster, New Jersey.

Trump was wowed by General James “Mad Dog” Mattis, who could be picked as defense secretary. Mattis lead the US military Central Command between 2010-2013, which overlooks operations stretching from the Horn of Africa to the Middle East and central Asia, including conflicts in Afghanistan and Pakistan.

Big names in the running

Friends and foes alike could be chosen by Trump. Former Massachusetts governor and 2012 Republican presidential candidate Mitt Romney met with Trump on Saturday for the position of secretary of state. This position is also coveted by former New York City Mayor Rudy Giuliani.

Romney called Trump a “fraud” during Trump’s successful campaign, and a source close to Romney said he may be “frozen out” by officials who are close to Trump. Former New York City Mayor Rudy Giuliani also met with Trump for the position. Trump also hails from New York City.

New Jersey Governor Chris Christie, who supported Trump after his own presidential campaign fizzled out, also met with Trump over the weekend. It was unclear whether the meeting was about a potential cabinet position, as Trump simply called Christie “a very talented man, great guy.”

Former Texas Governor Rick Perry, who made unsuccessful bids for the Republican presidential nomination in 2012 and 2016, will meet with Trump on Monday. Perry will be considered for several cabinet positions, including defense, energy and veterans affairs, said Trump’s transition team.

‘Running out of time’: US adds new demands as Russia makes concessions to save last remaining nuclear deterrent deal – envoy

Thinktanklandia: A Pfizer CEO ‘not certain’ their vaccine stops transmission of Covid-19 as company’s jab approved in UK and evaluated in USWashington Echo Chamber... 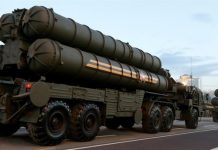