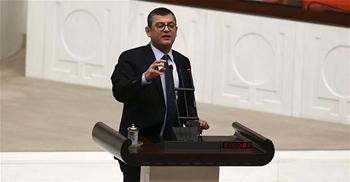 The main opposition Republican People’s Party (CHP) has vowed to take charter changes to the Constitutional Court for annulment as many ruling Justice and Development Party (AKP) lawmakers have violated the “secret ballot” principle, a senior party official has said, adding that they would strongly resist in the second round of the voting process expected to commence on Jan. 18.
“We will take our strongest stance once again in the second round if members of the AKP attempt to violate the secret vote principle again. We will not allow such voting to proceed. We will record all voting violations by using technological means and our rights cited in the Internal Regulation. And we will take them to the Constitutional Court in due course,” Özgür Özel, the deputy parliamentary group leader of the CHP, told reporters at a press conference on Jan. 16.

Özel said they will seek the cancellation of the vote if lawmakers were to cast their votes openly and put others under pressure again, recalling that the high court will monitor the voting in the second round of the constitutional amendment process.

Deputy Prime Minister Numan Kurtulmuş acknowledged the CHP’s right to take the process to the high court in televised comments on Jan. 16, noting that it is “natural” for the party to seek its right to object.

Kurtulmuş, however, urged the CHP to resist peacefully in the second round of voting. “It’s not possible to show tolerance,” he added, noting that CHP lawmakers should not repeat attempting to block the legislative process “by occupying and destroying the rostrum, by breaking a lawmaker’s nose or by biting a lawmaker’s leg.”

“Our advice is that they should refrain from acting in a way that would shame Turkey. At the end of the day, the decision belongs to the people,” he said.