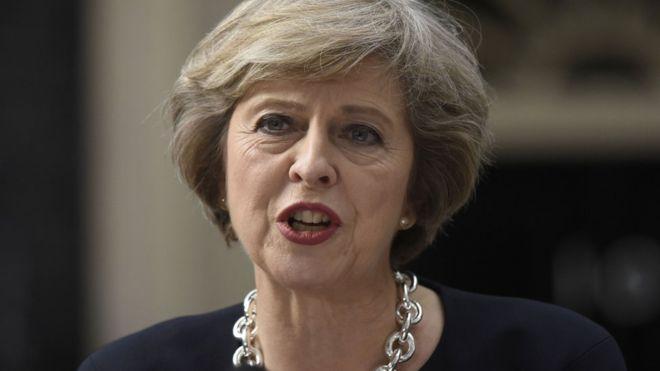 by Timothy Ross and Robert Hutton

The U.K. is likely to pull out of the European Union’s single market for goods and services and seek a completely new trading relationship with the bloc, Prime Minister Theresa May will say Tuesday as she sets out her plan for Brexit.

In a blow to business groups pressing for the closest possible links to Europe, May will use a speech in London to explicitly say she expects Britain to leave the single market and overhaul its links to the customs union, according to a person familiar with the matter. She has no interest in a “partial” or “associate” membership of the EU or “anything that leaves us half-in, half-out,” according to extracts released by her office.

“We seek a new and equal partnership — between an independent, self-governing, global Britain and our friends and allies in the EU,” the premier will say, according to the extracts. “We do not seek to adopt a model already enjoyed by other countries. We do not seek to hold on to bits of membership as we leave.”

Leaving the single market for services will be a disappointment for banks, which may start shifting jobs and operations from London to ensure continued access to the other 27 EU member-states. It will also raise pressure on May to secure a transitional period after Brexit so they and companies exporting goods can adjust.

In an interview at the World Economic Forum’s annual meeting in Davos, Switzerland, UBS Group AG Chairman Axel Weber said his “working assumption” is banks will lose access to the EU, but that it’s still too early to turn contingency plans into action.

“It’s important to create optionality now, but let’s see what the final agreement is,” he said, adding he expected a transition to be agreed.

After months of pressure to provide a detailed blueprint for Brexit, the prime minister’s office is billing Tuesday’s speech as her completed — and final — plan for the negotiations.

May has so far tried to say as little as possible about her strategy, arguing that revealing her negotiating direction before talks begin would tie her hands. It would also open her to criticism both in advance, for seeking too much or too little distance, and afterward if she fails to get what she wants.

But this reticence has created its own problems. On Monday, traders expressed frustration that Downing Street wouldn’t even reveal what time the prime minister was due to deliver her speech. Pound volatility climbed to its highest level since August.

The pound had already fallen to its lowest level since the flash crash in October on reports at the weekend that May would be aiming for full separation from the EU. Government officials plan to contact banks in London immediately after Tuesday’s speech to provide reassurance and attempt to calm the markets.

The prime minister will also come under pressure from the opposition Labour Party, which has been demanding details of the kind of Brexit she wants to deliver. While she will avoid immediate questions from lawmakers by not delivering her speech in parliament, she or one of her ministers is likely to be called to the House of Commons to explain and defend the plan.

On Monday night, May’s office said she will announce 12 key objectives, which are set to include gaining full control over immigration, restoring power over lawmaking to the U.K. Parliament, and ending the jurisdiction of the European Court of Justice over British laws.

While she will say she expects Britain to leave the single market, May will be less definitive about the European customs union after Brexit, indicating a hybrid, partly-in, partly-out model may be the best option, according to the person familiar with the matter. Ministers have previously suggested the U.K.’s membership of the trading arrangement could become partial, involving deals on a sector-by-sector basis.

As a full member of the EU customs union, Britain is legally unable to strike its own free trade agreements with other countries. While the details of May’s customs plan will not be outlined in full, her direction will be clear: toward a deal that allows the U.K. to trade freely with countries around the world.

“I want us to be a truly global Britain — the best friend and neighbor to our European partners, but a country that reaches beyond the borders of Europe too,” she will say. “I want Britain to be what we have the potential and ambition to be: a great, global trading nation that is respected around the world and strong, confident and united at home.”

May will seek to reassure European governments, some of whom will have representatives in the audience for her speech in central London, that she wants to remain “reliable partners, willing allies and close friends.”

“We want to buy your goods, sell you ours, trade with you as freely as possible, and work with one another to make sure we are all safer, more secure and more prosperous through continued friendship,” the Prime Minister will say.