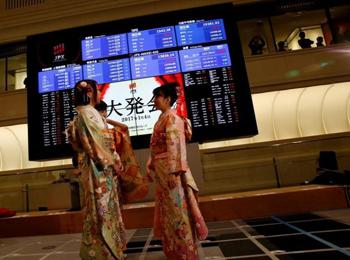 The pound hovered near three-month lows versus the dollar on Tuesday and stocks were mostly weaker as investors waited for British Prime Minister Theresa May to lay out plans to exit the European Union amid fears Britain will lose access to the single market.

Safe-havens such as the yen, gold and Treasuries gained in turn.

According to her office, May will say in a speech later in the day that Britain will not seek a Brexit deal that leaves it “half in, half out” of the EU. She is due to set out her 12 priorities for upcoming divorce talks with the bloc.

Those priorities will include leaving the EU’s single market and regaining full control of Britain’s borders, media reported, reinforcing fears of a ‘Hard Brexit’ which has pushed the pound to some of the lowest levels against the U.S. dollar in more than three decades and weighed on other riskier assets.

Growing uncertainty over the policies of Donald Trump have also hurt equities, which had rallied in many parts of the world thanks to speculation that the U.S. President-elect would enact bold stimulus and reflationary measures once in office.

“Europe is going to be dominating the headlines today, and the focus is justifiably on May’s speech, and also on the interviews that Trump gave to European newspapers,” said Stefan Worrall, director of Japan equity sales at Credit Suisse in Tokyo.

The yen benefited from its safe-haven status, gaining versus the dollar, euro and sterling.

The dollar was down 0.3 percent at 113.790 yen JPY= having gone as low as 113.610 the previous day, its weakest since Dec. 8. The greenback also pulled back against the Swiss franc, another currency sought out when risk sentiment sours.

Gold was helped by the heightened risk aversion stemming from Brexit and uncertainty over Trump’s plans.

Elsewhere, the price of U.S. Treasuries rose, taking the yield on the benchmark 10-year note US10YT=RR down by about 2 basis points.