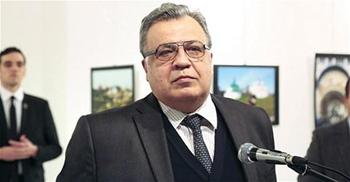 The assassin of Russian Ambassador to Turkey Andrey Karlov, Mevlüt Mert Altıntaş, was buried in the cemetery of the nameless in Ankara on Jan. 13, state-run Anadolu Agency has reported.

The family of the 22-year-old police officer did not apply to take his body within the legal timeframe, ultimately prompting authorities at the Forensic Medicine Institute to hand over Altıntaş’s remains to municipal teams last week.

The municipal units buried Altıntaş in to the cemetery of the nameless on Jan. 13, the agency said.

Altıntaş was gunned down on Dec. 19, 2016, following an exchange of fire with security personnel after killing Karlov who was delivering a speech during a photo exhibition in the Contemporary Arts Center in the central Çankaya district.

Russian and Turkish officials immediately launched a joint investigation into the assassination.

Recently, Interior Minister Süleyman Soylu stated that the investigations into the assassination were producing “interesting developments.”