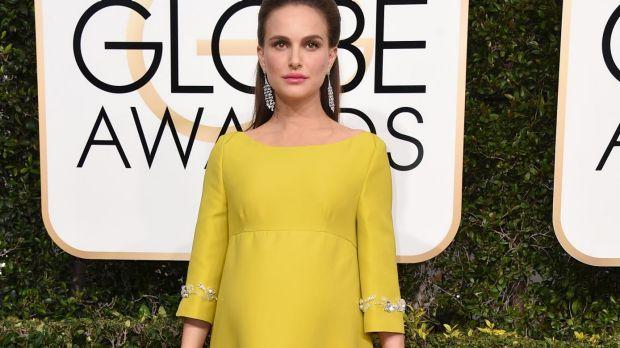 Bee Shapiro
Natalie Portman approaches clothes the way she does her roles: She is impeccably prepared for the occasion, exhibiting enough of her own taste to be distinctive and laudable, yet like a true movie star, she is still very much “Natalie Portman,” meaning that, on the red carpet, she enjoys fashion but is no tragic slave to the pomp and circumstance.

For a pro like Portman, a pregnancy during her current awards run (she is nominated for her take on Jacqueline Kennedy in Jackie, for which she has won a Critics’ Choice Award) has made hardly a bump (couldn’t resist). With Kate Young, her longtime stylist, her choices have been cleverly tailored for fit and flow.

“Even pregnant, she’s a tiny person,” Young said, adding that, when figuring out proportions, it helps that she and her client are the same height and size.

“Sample sizes are regularly huge on her, so now it’s actually often easier to wear runway pieces. It’s not all custom.”

To wit, the dark A-line Dior gown she wore at the Palm Springs International Film Festival this month (she is a face of the brand) was reserved directly from the catwalk. And a navy Erdem gown with jewelled accents worn at the Huading Global Film Awards in Los Angeles in December was also a runway score.

Though elegance underlines all of her choices, Portman has a romantic streak. Don’t expect too much froufrou, though. “She doesn’t like things that are fussy,” Young said. Rather the romance is expressed “in the colour palette and fabric, a soft drape as opposed to a fitted thing,” the stylist said.

The sun-embellished white Dior gown she wore at AFI Fest in November and the black and white lace Valentino gown with loose cape sleeves worn at the Jackie premiere at the Venice Film Festival each had a Juliet quality. The same goes for a celery green Prada gown with sequin flowers in which the actress appeared at the Toronto International Film Festival in September. It was gently tied at the waist.

The cape-sleeved Alexander McQueen cocktail dress, red and black with velvet trim, that she chose for the Critics’ Choice Awards, was also a visual feat. “The way the cape created the shape of the shoulder was flattering,” Young said. “When you’re pregnant, people often think a tent would be the best shape when often it’s not. Looking chic when you’re pregnant is about defining the places that are still you and on Natalie that would be her arms, neck, bust and legs.”

Chances are you will find Portman in a Rodarte creation at some point during the season. Such was the case at the Gotham Independent Film Awards when she slipped into an offbeat white lace cocktail dress with a sequin floral motif. That moment of weakness can be forgiven, though. The long-sleeved chartreuse Prada gown she wore at the Golden Globes, and the Diors she chose for a couple of Planetarium premieres; an embellished ivory coatdress in Toronto and a sweeping one-shoulder white gown at the Venice Film Festival were lessons in chic.

Portman sometimes wears sparer designs, including ones by the Row: She wore a vertical-stripe ivory gown for the Israel Film Festival Anniversary Gala last fall and a square-necked clingy black dress for the Hollywood Film Awards.

“I love to wear the Row in my personal life, and so do a lot of my clients, but often for the red carpet, it’s too understated,” Young said. “Actresses aren’t going to a premiere for fun. They’re going to promote a movie, so wearing a simple black dress is generally a little too quiet for my aim.”

With her pregnancy, though, Portman amplifies every look, Young pointed out. “She doesn’t need much to stand out.”