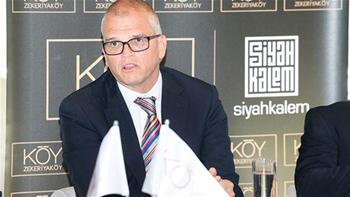 Economist Tim Ash, who has followed Turkey closely for almost two decades, has said the losses in the Turkish Liras are of “great concern” amid broader uncertainty, but the issue can be addressed if the Central Bank moves rapidly.

Speaking to reporters at a meeting organized by Siyah Kalem Engineering in Istanbul on Jan. 13, Ash said the steep losses in the lira’s value have pushed the Central Bank to a point at which its options are limited. However, he warned of a “credit crisis” if the Bank does not take the right decisions.

“The foreign debts of the Turkish private sector have hit $180 billion. These need to be paid over this year. The debtors are the country’s largest businesses and their liquidity is quite high. If the Central Bank takes decisive steps their profits will be slashed but there will be no credit crunch. However, if the Bank is unable to manage the interest rates and the foreign exchange rates in a rational manner, a credit crisis erupts. We do not see any Turkish company facing a failure to meet its financial obligations. But a potential credit crisis would put great pressure on the economy over the next three to five years,” said Ash.

“There is no need to be a rocket scientist. Security concerns and terror attacks may not be resolved easily, but monetary policy can be addressed. Turkey has recently been covered by the foreign media outlet almost every week with a horrible terror attack. I have been closely following the Turkish economy since 2000, but even I have struggled to understand what the July 15 coup attempt was really about. This took much longer for the foreign press,” he added.

“You cannot control some factors, but you can stabilize the parity. The Central Bank is acting quite rationally, but it must immediately remove the uncertainties in the eyes of investors,” Ash said.

Çetinkaya’s ‘test with the markets’

He noted that the Turkish economy has a number of key strengths including fiscal discipline, strong macroeconomic indicators, a robust banking sector, a rich entrepreneurship spirit and a unique geopolitical position, but it faced severe challenges that the Central Bank was struggling to deal with.

“Foreign investors believe the lira will further weaken. The main reason behind this is that the Central Bank’s policies are not seen convincing. Turkish officials could reverse global investors’ feelings about Turkey in 2014. A strong lira will also be good for the Turkish citizens, pushing up domestic demand. In a bid to overcome this confidence crisis, an interest rate hike is needed. The longer the Bank waits to take this step, the higher the rate hike that will eventually be needed. If the Bank hikes rates now, it will send a strong signal to the markets,” Ash said, pointing to the Bank’s upcoming Monetary Policy Meeting and suggesting that the Bank could limit the lira’s loss by making a 100 percentage point rate hike.

“If the Bank, however, waits two more weeks, then maybe we will be talking about a much higher rate hike to boost the lira,” he said.

“The markets are testing Central Bank Governor Murat Çetinkaya. If the Central Bank had given a stronger reaction after the July 15 coup attempt, Moody would probably not have cut Turkey’s credit rating. Unless the Bank takes a robust step now, Fitch will likely do on Jan. 27 what Moody’s did,” added Ash.

The lira has lost as much as 10 percent against the dollar since the start of 2017, making it one of the worst-performing major currencies of the new year. Concern over political and economic stability is being compounded by doubts about whether the authorities will take decisive steps to stabilize it.

On Jan. 12 the lira appreciated sharply against U.S. dollar following the Central Bank’s announcement it would not hold its usual weekly repo auction, with the USD/TRY rate tumbling below 3.81 levels from 3.93 liras in the early hours of the day.  It rebounded to 3.75 on Jan. 16.

‘You can price risks, but not uncertainties’

Emerging market investors do not like uncertainties and Turkish policymakers need to do more to convince global investors that Turkey is still an investable country, Ash also said.

“You can price the risk, but not the uncertainty. Turkey’s policymakers need to convince global investors in an aggressive manner that Turkey is still an investable country. Investors poured a significant amount of money into Turkey’s assets between 2002 and 2013. But even they do not grasp Turkish politics anymore. They make their investment decisions by looking at global developments and comparing Turkey with South Africa,Brazil and Russia,” he added.