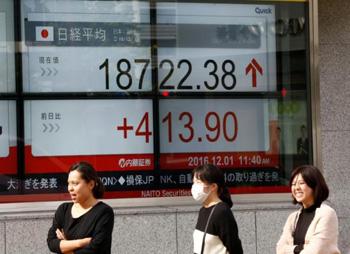 Asian stock markets stabilized near three-month highs on Wednesday, helped by Hong Kong and Chinese shares, as investors judged U.S. President-elect Donald Trump’s concerns over a stronger dollar to be beneficial to some of the regional bourses.

Short-covering also helped, especially in China .SSEC, which tumbled more than 4 percent last week, as traders took some money off the table before Trump’s inauguration on Friday.

The firmness in Asia is expected to extend to Europe with stock futures in key European markets pointing to a higher start.

“Trump’s comments on the dollar has helped relieve downward pressure on the renminbi and on Chinese equities and we have seen a steady pick up in capital flows from mainland investors into Hong Kong stocks,” said Alex Wong, a portfolio manager at Ample Capital with $100 million in assets under management.

By midday, Hong Kong stocks poked above a key resistance level around 23,000 which if successfully breached would position the market for further gains, according to analysts.

Moreover, capital flows via the Shanghai and the Shenzhen connect programs have flipped decisively in favor of Hong Kong stocks in recent days, indicating mainland investors are gradually turning bullish over the broader market outlook.

While investors have become somewhat optimistic on the outlook for Asian equities in the past two weeks – prompting regional markets to outperform developed market peers, underlying caution remains due to China concerns.

Gene Frieda, a portfolio manager at bond giant PIMCO, wrote in a note that though Chinese economic growth looked stable into early 2017, a more marked slowdown by the second quarter “appears inevitable” amid the backdrop of ever-increasing debt.

In currency markets, the British pound consolidated gains on Wednesday after posting its biggest rise in nearly two decades in the previous session.

Sterling’s GBP=D4 rally was triggered after Prime Minister Theresa May promised a parliamentary vote on Britain’s deal to leave the EU and sought to draw a line under discussion of a “hard” or “soft” Brexit.

It was trading at 1.2331 against the dollar, giving back some of its near 3 percent gains scored in the previous session. That was the biggest climb since 1998, according to Thomson Reuters data..

“Markets cannot be too optimistic about the UK parliament having the final vote. Brexit, hard or not, will weigh on the UK economy,” said Masashi Murata, currency strategist at Brown Brothers Harriman.

The dollar’s recent weakness deepened after President-elect Donald Trump said the greenback’s strength against the Chinese yuan “is killing us.”

The dollar’s renewed weakness put a floor under some Asian currencies which have been punished by investors such as the Chinese currency traded in the offshore marketCNH=D3, and has helped attract flows into some markets like Korea.

With doubts growing about the sustainability of the “Trump trade” – higher stocks and stronger dollar – safe-haven assets glittered. Gold XAU= was perched comfortably at a two-month high above 1215 dollars per ounce. It is up nearly 8 percent in the last three weeks.

Bond markets also doubted Trump’s stimulus policies with the spread between ten and two year U.S. debt – an indicator of interest rate expectations – tightening by around 20 basis points over the past month.

Oil prices were locked in a tight range, with benchmark Brent futures LCOc1 steady at $55.67 per barrel as a decline in the dollar offset forecasts that U.S. and Russian producers would boost output later this year.