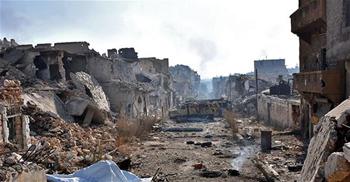 UNITED NATIONS, January 17. /TASS/. Russia’s Permanent Representative to the United Nations, Vitaly Churkin, suggested on Tuesday the United Nations act as a mediator between the Syrian government and the opposition at the forthcoming talks in Kazakhstan’s Astana.

“The Astana format envisages invitation of United Nations representatives who might act as mediators in contacts between the Syrian parties,” Churkin said at a U.N. Security Council meeting dedicated to the situation in the Middle East.

He said the meeting in Astana is “a kind of a bridge towards inclusive Geneva talks appointed by U.N. Secretary General’s Special Envoy Staffan de Mistura on February 8.”

Commenting on Russia’s proposal, U.N. Secretary General’s Deputy Spokesman Farhan Haq said that the United Nations is still looking at its possible role at the Astana talks but pledged the organization would offer as much support as possible.

Earlier in the day, Haq confirmed to TASS that the U.N. had received an official invitation to the talks in Astana. He said Staffan de Mistura had formed a delegation that would be led by his deputy Ramzi Izz Eddin Ramzi.

Astana will host talks on the situation in Syria on January 23. It is yet unknown who will take part in the negotiations. However Reuters said most of Syria’s armed groups plan to take part. The talks are to focus on issues of maintaining ceasefire throughout the country, humanitarian assistance and prisoner release. Plans to hold consultations in Astana were announced after a meeting between Russia’s, Turkey’s and Iran’s foreign minister in Moscow on December 20, 2016. The three ministers spoke in favor of a nationwide ceasefire in Syria.