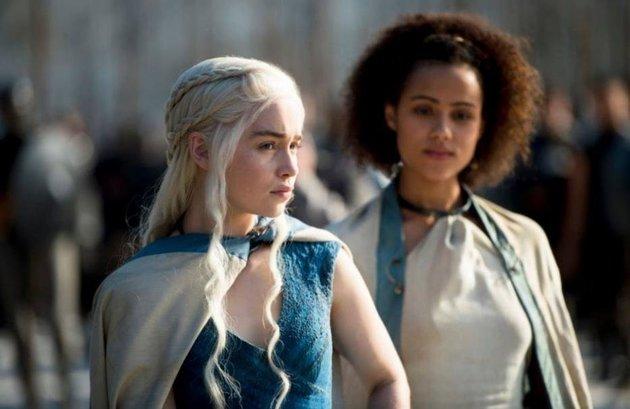 The little birds could be right.

Despite a pretty cut-and-dried (emphasis on cut) exit from the show in Season 6, apparently a “Game of Thrones” actor is making a return in Season 7. It’s exciting news for fans, not so much for HBO.

As reported by Watchers on the Wall, according to an official agency resume, actor David Bradley, aka Walder Frey, is appearing in “Game of Thrones” Season 7.

You might recognize Frey as the dude who helped set up the Red Wedding, which led to the deaths of Robb and Catelyn Stark.

So what’s the problem?

Well, you probably also remember Frey from a scene in Season 6, where Arya Stark serves his sons to him in a pie and slits his throat.

Yeah, that’s not a cute look.

If he does return, there’s probably only one reason why: Arya is putting her Faceless Men skills to work again by parading around in Frey’s skin.

It sounds awesome, but here’s why it’s not super great for HBO.

Late last year, there was supposedly a massive leak of the “Game of Thrones” Season 7 plot from Redditor awayforthelads. Though you need to look at all leaks with skepticism, details from the Redditor are slowly getting confirmed. First, it seemed that a detail about Jon Snow bringing a wight to Westeros was true. Also, leaked photos show Jon and Dany meeting, which supports a rumor that the two will become lovers. (I wish I could erase that idea from my mind so I wouldn’t have to write the word “lovers.” Gross.)

Now, there’s this latest tidbit: Arya wearing Frey’s face to kill more of his sons is also in the leak.

Look, no one’s going to pull a Jon Snow and try to bring Frey back to life. He’s not really a pleasant dude. If actor David Bradley does return, Arya is likely the reason why.

Hang in there, Lady Mormont.