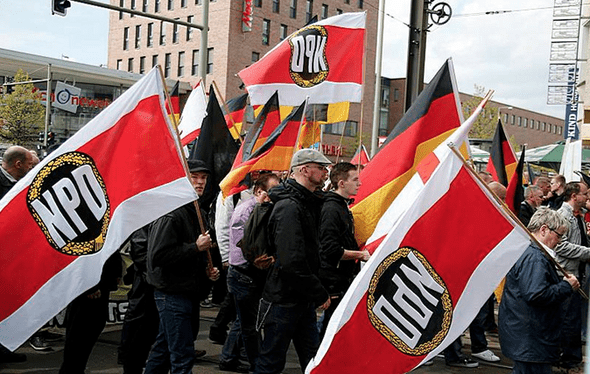 GERMANY’S supreme constitutional court has rejected a proposal to ban a far right party with neo-Nazi ties because its members pose no threat to democracy.

The Federal Constitutional court rejected calls from all of Germany’s 16 states to outlaw the National Democratic Party (NPD) for its “racist” views.

Judges said: “Their political concept disregards human dignity and is incompatible with the principle of democracy.

“The NPD also works in a well-planned way and with sufficient intensity to achieve its goals against the liberal democratic order.

“However, there is [currently] a lack of concrete evidence showing it is possible for these actions to lead to success.”

They argued that while the party uses inflammatory rhetoric, espouses anti-Semitic views and uses symbolism of the Third Reich, this did not warrant a ban.

The court argued that the party stood no chance of fulfilling its ideals.

The ban was first sought in 2013. If it had been approved, it would have been the first of its kind since 1956.

It is the second time that an application was made to ban the NPD, the first time was in 2003.

Founded in 1964, the party brands itself a “patriotic organisation”.

It opposes Americanisation, Islamisation, migrants, globalisation and multiculturalism and says in its manifesto that “Germany must remain the country of Germans”.

It is a highly visible presence in Germany as it holds frequent rallies.

Another of its aims is that it wants the country to exit the EU much like Britain.

Several of its members have been convicted of denying the Holocaust.

And the NPD has lost its footing with voters.

It has not done well in local elections recently, because of the rise of the Alternative for Germany – a right wing party launched in 2013.

It no longer has any seats in any state assembly a fall from grace from 1969 when it had 4.3 per cent of the national vote.