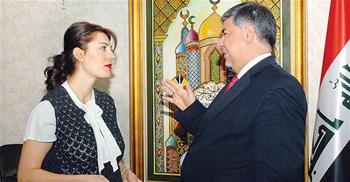 Iraq has provided information to Turkey regarding Islamic State of Iraq and the Levant (ISIL) members that crossed into Turkey or who have been trying to do so, Iraq’s ambassador to Ankara has said.

“The available information suggests that a significant number of them have already crossed the border to Turkey. Others are trying to do so. Many of them are from Tel Afar and Mosul or from other towns around. We have provided this information to Turkey,” Ambassador Hashim al-Allawi told the Hürriyet Daily News.

“It’s important that the two sides cooperate and share information when it comes to separating genuine citizens that have been forced to leave their hometowns and from Daesh [members] that left towns and villages because of military operations. They could pose a threat to the national security of Turkey, as well as the national security of Iraq,” the ambassador stated.

It is a serious issue since “we are taking about thousands of DEASH” members, Al-Allawi said, using an Arabic abbreviation for ISIL.

On the sidelines of a high-level cooperation council meeting on Jan. 7, the heads of intelligence chiefs “have discussed these issues in detail and there is an agreement to cooperate,” he said.

The issue was also discussed when a Turkish delegation went to Arbil, as part of Prime Minister Binali Yıldırım’s visit to Iraq earlier in the month, he said.

“I was with them. There was a joint meeting between the Turkish delegation and the Iraqi Kurdistan delegation. One of the key issues that two sides discussed was security cooperation,” said al-Allawi.

Approached by the Daily News, a Turkish official said that during the meetings in Baghdad, two sides agreed to develop bilateral relations, enhance cooperation primarily in the struggle against terror and exchange the names of terrorists.

Defense minister to visit only if withdrawal is discussed

The ambassador recalled consensus between the Iraqi and Turkish prime ministers during the latter’s visit to Baghdad, saying there was a need for technical teams from the relevant authorities, such as the defense and interior ministries and the intelligence organizations, to sit down to agree on the practical steps for the withdrawal of Turkish troops from northern Iraq’s Bashiqa military camp.

Only if progress is achieved in the withdrawal from Bashiqa, will “the necessary positive environment” be achieved to move forward to enhance bilateral relations in other areas, he said.

“There is a need to intensify efforts on counter-terrorism. There is a need to talk about practical steps on economic trade relations and to increase trade volume and increase the number of border gates. The visit was an important step toward resolving the issues that increase the tension. Obviously, we need to see practical steps that help eliminate all the tension. The next few months will be critical to help us move in this direction and have the positive environment that we need in order to go forward in other areas.”

Elaborating on an invitation from Defense Minister Fikri Işık to his Iraqi counterpart, the envoy said the visit could occur depending on “how the issue is presented by the Turkish authorities.” The Iraqi official could visit Turkey if the parties discuss the modalities of the withdrawal from the Bashiqa military camp, he stated.

“If the invitation is to talk about the practical arrangements to withdraw [Turkish] forces from the Bashiqa camp, then the visit is likely to happen. But if we talk about an invitation to discuss general issues, I am not sure that that will happen. We need to show that we are serious about implementing the agreements the two prime ministers have and the relevant articles of the joint declaration.”

Sinjar to be cleared after Mosul offensive

The Mosul offensive for the west of the city has been successful as 60 out of 65 districts have been cleared of ISIL, meaning the battle for the western part will be relatively easier, according to al-Allawi.

“That means we are likely to see the end of Deash in their capital in Mosul soon. Then we can move on to other towns and villages, including Sinjar. There is an agreement between the central government and Kurdistan regional government to have a joint operation using the army and the Peshmerga to liberate Sinjar,” he said.