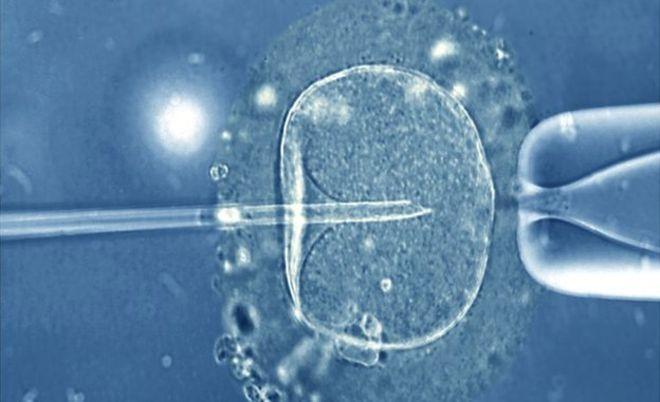 A baby has been born to a previously infertile couple in Ukraine using a new type of “three-person IVF”.

The Times reports that doctors in Kiev used a method called pronuclear transfer in what is a world first.

It is not the first baby born with DNA from three parents, however.

The baby, born on 5 January, is thought to be the world’s second “modern three-parent baby” – another child was created using a slightly different method in Mexico last year.

Doctors developed three-person IVF to help women who are at risk of passing on serious genetic disorders, called mitochondrial disease, to have a healthy child.

The resulting babies that are made have DNA from three people – the mum, the dad and a tiny bit from the egg donor.

The Nadiya clinic in Kiev used the technique to treat an infertile couple, not a couple carrying a mitochondrial disease.

Valery Zukin, who led the work, said they had a hunch it would work for the Ukrainian couple who had not been able to conceive with conventional IVF.

He said he had a second patient – in a similar situation – who is expected to give birth in early March.

The UK has already passed laws to allow three-person IVF for couples with mitochondrial diseases, although no such baby has been born in Britain yet.

The science is new and controversial and raises ethical questions, including how any child from the technique might feel about having DNA from three people.

Prof Adam Balen, chairman of the British Fertility Society, said: “Pronuclear transfer is highly experimental and has not been properly evaluated or scientifically proven.

“We would be extremely cautious about adopting this approach to improve IVF outcomes.”