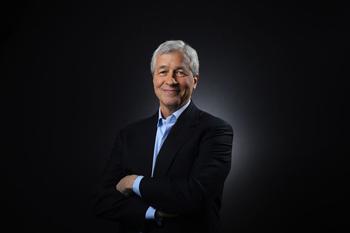 by Hugh Son and Sonali Basak

The euro region could break up if political leaders don’t get to grips with the discontent that’s spurring support for populist leaders across the continent, JPMorgan Chase & Co. Chief Executive Officer Jamie Dimon said.

Dimon said he had hoped European Union leaders would examine what caused the U.K. to vote to leave and then make changes. That hasn’t happened, and if nationalist politicians including France’s Marine Le Pen rise to power in elections across the region “the euro zone may not survive,” Dimon, 60, said in a Bloomberg Television interview with John Micklethwait.

“What went wrong is going wrong for everybody, not just going wrong for Britain, but in some ways it looks like they’re kind of doubling down,” Dimon said in the interview Wednesday at the annual meeting of the World Economic Forum in Davos, Switzerland. Unless leaders address underlying concerns, “you’re going to have the same political things about immigration, the laws of the country, how much power goes to Brussels.”

Dimon’s remarks on Europe were unusually pessimistic, coming in a wide-ranging interview in which he also criticized regulations that he said stunt economic growth. But he reiterated optimism for President-elect Donald Trump. Minutes later, Goldman Sachs Group Inc. Chief Executive Officer Lloyd Blankfein also expressed concern about Europe, telling CNBC that leaders are facing a backlash in the midst of a long, complicated process to create an economic bloc.

“That’s complicated, that’s very hard to do,” said Blankfein, 62. “It’s not done, and it’s not accomplished. We’re finding the pain of that.”

The Netherlands’s Geert Wilders and France’s Le Pen are among politicians that have won support for their opposition to the European Union.

Wilders’s Freedom Party has been leading in polls ahead of March 15 parliamentary elections. And polls have suggested Le Pen may finish second in the initial round of France’s presidential elections on April 23, and lose a May 7 runoff to center-right candidate Francois Fillon. Le Pen has called for France to exert more control over its economic policy, money, legislation and borders.

Dimon said he isn’t as worried about the future of the U.S. under Trump, whose own rise drew on a populist movement. The real estate mogul and reality TV star is enlisting “very serious people” for his administration, such as Goldman Sachs alumni Steven Mnuchin and Gary Cohn, who’ve been tapped to lead the Treasury Department and help oversee White House economic policy.

“The side that people are worried about a little bit, and I think is may be blown out of proportion, is trade,” Dimon said. “They’re listening to tweets and one-liners and statements” from Trump. But in his book, “The Art of the Deal,” the president-elect “will tell you he does that” as a tactic, Dimon said.

Asked about a concerns Trump may start a trade war with China, Dimon said he’s not worried. “I think these very rational people will be very thoughtful when they go about the actual policy,” he said.

Dimon said he doesn’t want the government to rip up the Dodd-Frank Act, the package of rules Congress passed in 2010 to prevent future financial crises. He has criticized the legislation for years as inconsistent and counterproductive to economic growth.

Instead, policymakers “should open it up, look what worked, look what didn’t, recalibrate it, modify it, change it, to accomplish what we want to do, which is what I call good regulation, not just more regulation,” he said.

Regulators should also reexamine requirements for bank capital and liquidity ratios, which Dimon said are preventing strong firms from lending more. The regulations are forcing JPMorgan and competitors to sideline hundreds of billions of dollars.

“If you look at the whole banking industry, I think there’s a way to go to let them be free to do their job,” Dimon said.