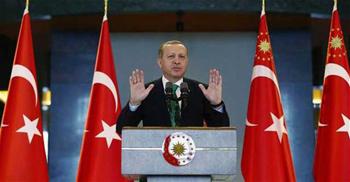 Suspects arrested over links to the Gülenist network who have become confessors to benefit from commutation are not telling the truth, President Recep Tayyip Erdoğan said on Jan. 18 at a meeting with members of the Association of Unity in Justice.

“They appear as confessors. But they are not speaking the truth. While they appear as confessors, they play deceit. And this is very dangerous,” Erdoğan said, adding that he had meetings with some of these individuals during his time as prime minister and the things they said now conflicted what they used to say.

Erdoğan has provided assurances that judicial institutions will protect their independent structure after he is made an executive president with sweeping powers thanks to a constitutional amendment, in response to criticisms that the judiciary would lose its impartiality due to charter changes.

“In the coming period, the pluralistic structure of the Supreme Board of Judges and Prosecutors (HSYK) will be protected. It is not possible to go back on this pluralistic structure, where we have seen a great benefit as a justice organization in the country,” Erdoğan said.

“With the amendment of the constitution, whose second round of voting will begin in parliament, the structure of the HSYK will have a pluralistic structure, being composed of 13 members, four of which will be assigned by the president, seven by parliament, while two will be permanent members – the justice minister and the undersecretary,” Erdoğan added.

Erdoğan’s comments came after the opposition fiercely criticized Article 17 of the constitutional amendment, which changes the configuration of the HSYK, reducing its number of members from 21 to 13. The opposition has said the members of the body will be highly politicized with the new configuration, thereby compromising the impartiality of the judicial system.

“Even though the legislative and executive seem separate on paper in our country, they are actually under control of one political power. Otherwise, it would be impossible to rule the country,” he said, while implying that the executive was toothless in the country.

“When we look at our history, we have seen many problems caused by this fact that there were two heads for the executive. The activity that a terrorist organization carried out in the judiciary indicated a problem there,” he said, referring to the infiltration of the Fethullahist Terrorist Organization (FETÖ) into the justice system.

“The redefinition of the relations between the powers of the executive, legislative and judiciary in a democratic manner is not a loss for Turkey; on the contrary, it is a gain.”

According to numbers provided by HSYK in a written response to the Parliamentary Commission founded to investigate the July 15 coup attempt, 3,994 judicial professionals had been suspended while 3,659 had been dismissed by state of emergency decrees as of Jan. 4.

“The discharge of FETÖ members has facilitated [the HSYK’s] works and accelerated and placed it on track rather than making it difficult,” Erdoğan added.