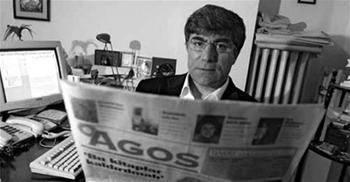 Today (Jan. 19, 2017) marks the 10th anniversary of the murder of Armenian-origin Turkish journalist Hrant Dink. Dink was shot dead by a young Turkish ultranationalist outside the office of the Agos newspaper, where he was editor-in-chief. Ten years have passed and the investigation into the killing drags slowly on, but Dink’s shining legacy remains undimmed despite seismic shocks in Turkey in the years since.

Dink led a path-breaking life, chronicled in Tuba Çandar’s biography “Hrant Dink: An Armenian Voice of the Voiceless in Turkey.” The book’s title is hokey but the text itself is stimulating. Dink fearlessly probed sensitive issues and interrogated the deeply held beliefs of all political sides. He was immensely courageous in the angry atmosphere of Turkey in the 2000s, and his tragic end was sadly foreseeable long before he was killed.

The biography interweaves vivid reflections on Dink’s life and work from 125 colleagues, friends, and family members. The relaying testimonies create a polyphonic effect distinct from a traditional third-person biography. At times the book veers toward hagiography, but on the whole we get a rounded picture of a remarkable man.

Dink was born into modest circumstances in the remote eastern Anatolian province of Malatya in 1954. When he was still a young boy his family migrated to Istanbul, where he had an almost Dickensian childhood: After his parents divorced he was left homeless on the streets of Kumkapı with his two brothers, ending up in an orphanage in the basement of a church. The pattern of his later life was a microcosm of Turkey’s modern history: Part of a family of poor Anatolian migrants to Istanbul; dabbling in political activism through the 1970s; detained and tortured (though never charged) after the 1980 coup; and on the frontline as Turkey underwent huge changes in the 2000s, when Dink became a major public intellectual.

It was Dink’s work at the helm of Agos, a weekly newspaper he started in 1996, that thrust him into the public limelight as an iconoclast. The word “agos” is a village term shared by Armenian and Turkish meaning “the furrow opened by the plow for sowing seeds,” and the newspaper certainly ruffled feathers, engaging in the debates emerging at the turn of the century amid the start of Turkey’s EU membership process.

Agos caused a stir in Turkey as a whole and within the country’s small Armenian community. Dink said it aimed to be “a window and a door”: “The Armenian community, which until now had been closed, wished to open up to the outside world. One of our main aims was to open the Armenian community to society at large.” Central to this was Agos’ challenging of the Armenians’ religious establishment, and Dink had a long-running dispute with the Patriarchate in Istanbul. “Agos questioned the order of things and made suggestions abhorrent to those who put religion at the center of our inward-looking community,” Dink wrote.

His broader perspective was remarkably empathetic. His communication style – in speech and on the page – was not that of a remote intellectual, but of a down-to-earth Anatolian. To Turks his honorable deportment testified to a millennia-long Anatolian Armenian heritage that cannot be erased; to diaspora Armenians he shattered stereotypes of Turkish Armenians as “prisoners or turncoats.” In the words of the writer Gerard L. Libaridian, Dink “had the strength to recognize even minor contradictions and to rethink. His greatest strength consisted in the fact that he knew he did not have all the answers.”

The sophistication that Dink brought to every issue brought a sense of mission to Agos. It also put him in a unique position as a go-between for Turks and Armenians. The academic Isabelle Kortian describes Dink as someone who “shattered taboos and brought prejudice and discrimination out into the open.” Libaridian says he eschewed all kinds of essentialism: “He invited the wrath of those most steeped in conventions and myths, those who loved their problems more than solutions, those who were afraid to question their own comfortable beliefs and prejudices, those who could not tolerate challenges to their hardened yet simplistic positions … Hrant welcomed any opportunity to compel people, states, groups, and individuals to think beyond the limits of their comfort.” For Dink, Armenian nationalism was little different from Turkish nationalism, and his mission was to “save both peoples from the scourge of nationalism.” Unsurprisingly, this angered many. “I have succeeded in angering the ultranationalists on both sides!” Dink wrote at one point. “The strangest thing is how similar these two sets of ultranationalists are in what they say, which shows how much they have in common … What one side calls white, the other calls black. If you suggest there might be some grey in between, they are utterly baffled. They forget their lines and they get agitated.”

His vision was clear regarding the fate of the Ottoman Armenians. He personally described the massacres of 1915 as genocide, but was bitterly critical of outside campaigns to compel Turkey to accept it. “External pressure – as history has shown – will do no good at all,” he wrote. With great moral authority, Dink objected to “my history being mined for political capital” in America and Europe: “Behind all these caring words, I sense abuse. I reject the sort of shameful arbitration that would strangle my future with my past. I shall not bow to any parliament, or any state, that seeks to arbitrate on my behalf. The true arbiters are the people and their consciences.” With characteristic wit, he said he “looked forward to the day when Turkey and Armenia can converse on all matters with ease, allowing me to turn to irrelevant third parties and say, ‘From now on, you can mind your own business.’”

The final chapters of the book are particularly poignant. Dink’s assassination did not come out of nowhere – it was a death foretold. An angry campaign by Turkish nationalists marred the final years of his life. Vultures started to circle after a piece Dink wrote about Sabiha Gökçen in February 2004, referring to claims that Atatürk’s adopted daughter was an Armenian orphan plucked from an orphanage in east Anatolia. Another piece was misinterpreted to claim that he said Turkish blood was “broken.” He was subjected to death threats, a media vilification campaign, protests everywhere he went, and serial prosecutions based on the infamous Article 301 on “insulting Turkishness.”

Sadly, those tactics have changed little in the 10 years since Dink’s death and the singling out of identified “traitors” remains commonplace. “I see it sometimes in documentaries,” Dink wrote in the midst of his ordeal. “The lions are going after a pack of animals, but the pack has left one animal behind. The plan all along is to separate one animal from the pack and then descend on it en masse. I believe they have isolated me and made me their target in much the same way.”

Çandar’s biography is a moving account of Dink’s proud and pioneering life – a life that can still shine a guiding light in dark times 10 years after his assassination.