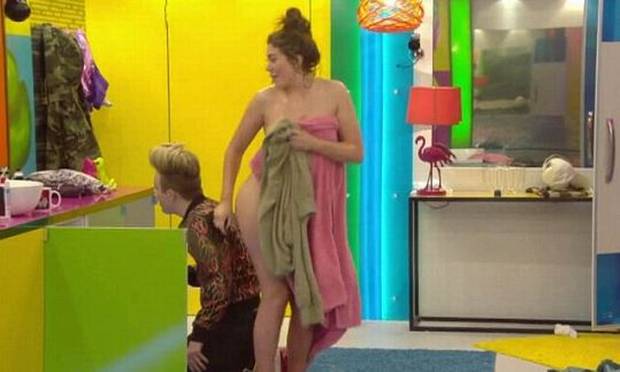 Is sexual assault against a man ok?

That would seem to be the message producers of Channel 5’s never-ending trash-fest Celebrity Big Brother are projecting.

A clearly uncomfortable John replied as he covered his eyes with his hands:  “Oh God, oh God, what are you doing? What are you doing to us? Jeez, I can’t even look at you right now.'”

The house continued on as normal, with more Z-listers desperately attempting to extend their 15 minutes of fame into a 16th.

But wait, wasn’t John just sexually assaulted? If a male contestant left the shower naked and rubbed his bare bottom against an unsuspecting female contestant one would expect he’d receive an immediate warning from producers, if not possibly prosecuted on the outside.

Look, far be it from me to rain on the parade – it very well could have been a harmless joke between friends, which offended neither party involved.

But John looked clearly uncomfortable during the exchange.

So where’s the outrage? Where are the social media campaigns?

During Big Brother’s long history between Channel 4 and now Channel 5 – there have been dozens of controversial moments.

The Shilpa Shetty/Jade Goody racism controversy and the Christopher Biggins anti-Semitic joke controversy spring immediately to mind. They both resulted in a massive public backlash.

So where is the outcry over a possible sexual assault? Clearly it’s on the minor end of the scale and unintentional, but what message does it send to viewers? Rubbing your bare bottom on a friend is ok? Regardless of how uncomfortable they are?

John could have found the whole exchange funny, and it possibly didn’t bother him in the slightest. That’s fine. But why didn’t producers intervene as they surely would if the genders were reversed?

Chloe obviously intended the whole exchange as a bit of harmless fun – but if the genders were reversed could a man brush off the accusations by saying it was “a bit of fun”?

I don’t find the whole incident offensive as TV viewing, rather that I don’t think there would have been such a muted reaction if the gender roles were reversed.

A Channel 5 spokesperson told Independent.ie that the incident would be shown on tonight’s highlight show in full and that “in accordance with established protocols Big Brother dealt with this accordingly.”

So it remains to be seen – maybe Chloe has since been removed from the house for her behaviour.

But anything short of removing her sends the message that John is a man – and a man can’t be sexually assaulted by a woman.