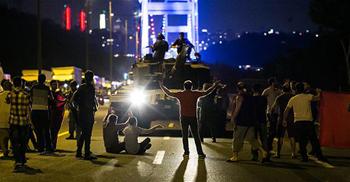 The military has lost its decades-long status as Turkey’s most trusted institution following the failed coup of July 15, according to a recent poll.

While the military topped the list as the most trusted institution in the country with 62.4 percent in the same poll conducted by Kadir Has University last year, the figure fell to 47.4 percent this year. This placed it in second position, below the presidency which rose from 46.9 percent to 49.4 percent.

In all the Research of Social and Political Trends in Turkey survey conducted since 2000, the military has up to this year always topped the list of trusted institutions.

The presidency was this year among the few institutions in Turkey that have seen an increase in trust.

The poll, conducted in the first half of December 2016 in 26 provinces and made public yesterday, revealed that many institutions have suffered a loss of public confidence. In addition to the military, universities are also big losers, with 24.7 percent saying they trust universities, down from last year’s 49.8 percent. NGOs saw a similar decrease, with 26.2 percent saying they trust NGOs, down from last year’s 42.3 percent.
Only 1.5 percent of those polled said they were a member of an NGO.

Trust in political parties also sharply decreased, from 33.9 percent to 21.8 percent, while parliament saw an increase of 3 percent from 43 percent to 49 percent. The media came at the bottom of the list of trusted institutions, with only 15.1 percent saying they trusted the media, down from 27.8 percent last year.

Erdoğan’s popularity on the rise

In addition to the increase in trust in the presidency, the approval rating for President Recep Tayyip Erdoğan saw an increase compared to last year’s survey. In 2015, 43.6 percent of respondents found him successful, up to 48 percent this year.

Officials from Kadir Has University noted that the poll was conducted before recent parliamentary debates on the constitutional change and long before any prospective referendum campaign.

The survey also revealed a change in the public’s attitude to the government’s foreign policy, which 35 percent found successful and 33 percent found unsuccessful. The latter figure marks a drop from 41 percent last year.

Again, for the first time in years the number of those who believe the government’s fight against terror to be “successful” (35.6 percent) outnumbered those who found it “unsuccessful” (28.4 percent). Last year the latter figure was 45.8 percent.

Meanwhile, there was a slight decrease in the number of those who see the Islamic State of Iraq and the Levant (ISIL) as a threat, down to 76.1 percent from 78 percent last year.

The survey also touched on the public’s attitude to the government’s sweeping post-coup attempt measures. Some 59.8 percent said they supported the initial declaration of a state of emergency, while 48.5 percent said it should continue to be extended.