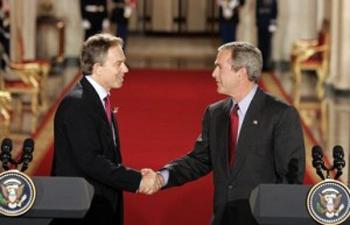 January 17 was an unusually good day for truth and human rights on both sides of the Atlantic. Even before President Obama commuted whistleblower Chelsea Manning’s long prison sentence, the British Supreme Court ruled unanimously that government ministers cannot claim “state immunity” or other specious grounds to avoid legal accountability in cases of abduction (rendition) and torture. The decision was heralded by Amnesty International, the International Commission of Jurists, and other human rights groups.

The lawsuit against Britain’s former foreign secretary, Jack Straw, and a former senior intelligence officer was brought by Libyan dissident Abdel Hakim Belhaj, a militant opponent of Muammar Gaddafi. He was kidnapped with his pregnant wife from Bangkok in March 2004 based on a tip from MI6, the British intelligence service.

Taken to a secret CIA prison in Thailand, they were blindfolded, hooded, hung from hooks on the cell wall, beaten, and blasted with loud music. A few days later the CIA flew them to Tripoli, where Belhaj was jailed and tortured by the Libyan regime for six years. He says he was also interrogated by British intelligence officers.

Owing to an edict by President Obama, Bush administration officials have never been tried for their complicity in more than 60 renditions of CIA prisoners, but Britain’s senior officials may face justice thanks to their Supreme Court ruling, which cited legal authorities ranging from the Magna Carta of 1215 to the United Nations Convention Against Torture.

Evidence of official British complicity in the kidnapping of Belhaj was discovered by Human Rights Watch in Gaddafi’s intelligence files after the Libyan dictator was overthrown in 2011. A 2004 fax by the chief of counterterrorism at MI6 to his Libyan counterpart said of Belhaj’s capture, “This was the least we could do for you and for Libya to demonstrate the remarkable relationship we have built in recent years.”

At the time, Prime Minister Tony Blair’s government was cozying up to Gaddafi, not only to fight Islamist extremists but to exploit lucrative business opportunities in the sectors of oil and finance. (Blair continued to visit Gaddafi even after Blair left office to pursue banking deals for JP Morgan, according to a senior executive with the $70 billion Libyan Investment Authority.)

A 2012 story in the Guardian on the Belhaj case reported:

“Two weeks after the couple were rendered to Libya, Tony Blair paid his first visit to the country, embracing Gaddafi and declaring that Libya had recognized ‘a common cause, with us, in the fight against al-Qaida extremism and terrorism.’ At the same time, in London, the Anglo-Dutch oil giant Shell announced that it had signed a £110m deal for gas exploration rights off the Libyan coast.

“Three days after that, a second leading [anti-Gaddafi activist], Abu Munthir al-Saadi, was bundled aboard a plane in Hong Kong and taken to Tripoli in a joint British-Libyan rendition operation. Saadi’s wife and four children were also kidnapped and taken to Libya. The youngest was a girl aged six. The family was incarcerated . . . for more than two months before being released. Saadi and Belhaj were held for more than six years, however, and say they were subjected to torture throughout this time.”

In 2005, responding to revelations of such abuses in the U.S.-led “war on terror,” Foreign Secretary Straw insisted that the United Kingdom had not rendered suspects to other countries:

“Unless we all start to believe in conspiracy theories and that the officials are lying, that I am lying, that behind this there is some kind of secret state which is in league with some dark forces in the United States, . . . there simply is no truth in the claims that the United Kingdom has been involved in rendition full stop, because we have not been.” (The contrary evidence surfaced six years later, in 2011.)

In 2012, Saadi reached a £2.2 million settlement with the British government, which did not admit guilt. But Belhaj, who has asked for just £3 in damages, demands something money can’t buy: an official apology. Straw continues to deny responsibility for any unlawful renditions.

Andrew Tyrie, a Conservative MP and chairman of the All-Party Parliamentary Group on Extraordinary Rendition, praised the latest ruling for bringing the public “a step closer to the truth about Britain’s role in extraordinary rendition – the program of kidnap and torture developed during the Bush administration, and facilitated by the UK government.”

He added, “The risk now is that the new laws on secret hearings – in the Justice and Security Act – could nonetheless thwart efforts to get to the truth, and undermine the ability of the courts to demonstrate that justice is being done. It would be bad for British justice if most of this case ends up buried in closed material proceedings.”

The British government, which has spent more than £600,000 to fight the Belhaj case, claims that a full airing of the facts would seriously damage relations with the United States. President Obama could have knocked that assertion down at any time and welcomed the truth. Instead, he consistently refused throughout his two terms in office to convene a truth commission or hold anyone accountable for illegal rendition and torture (short of death). He even invoked the “state secrets” doctrine to block private lawsuits against government officials for torture.

Kenneth Roth, executive director of Human Rights Watch, wrote in 2011, “Obama’s deliberate suppression of this shameful past is wrong. It reflects bad policy, a dereliction of presidential responsibilities and a continuing disregard for international law. It treats torture as a policy option – one that can be turned on or off at presidential will.”

With a noted supporter of torture now moving into the White House, the folly of Obama’s approach is clearer than ever. That’s why a spokesman for the human rights legal defense organization Reprieve declared, “this case isn’t just about history. . . In 72 hours, a would-be torturer will take the reins of Earth’s most powerful security state. We enter the Trump era with not a soul held to account for Britain’s past role in rendition. . . Our intelligence agencies may well be pressured to help America torture again.”

To discourage that from happening, he urged Prime Minister Theresa May to “apologize to this family, draw a line in the sand against torture, and restore British honor once and for all.”