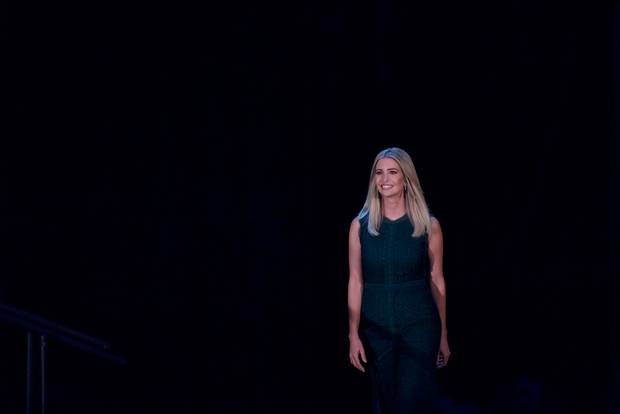 What you need to know about the incoming First Daughter – who will be the most powerful woman in the world.

It’s not hyperbole to describe as Ivanka as the soon-to-be most powerful woman in the world. She said yesterday she would not be “filling in” the First Lady role, but she is – unofficially – a key adviser.

“There is one first lady, and she’ll do remarkable things,” Ivanka told 20/20.

Melania Trump’s apparent lack of enthusiasm has been noted by supporters and critics alike – namely that she won’t be moving to the White House full time and will instead remain at her New York City penthouse with 10-year-old son Barron Trump, at least until the school term finishes.

Despite Ivanka moving her family to Washington D.C., she has not been given an official role, but is largely considered to be her father’s most trusted confidante.

Ivanka met real estate heir Jared in 2005 and broke up in 2007 due to his parent’s reported objections over their religious differences. They eventually reconciled and married in 2009. Before their wedding, she converted to Orthodox Judaism, but rarely speaks publicly about her religion. She is said to have received special permission from her rabai to travel in a car for the inauguration today as driving or riding in cars is banned on the Sabbath, which begins Friday at sundown.

When it looked like Donald Trump was headed towards a loss, Ivanka publicly distanced herself from her father’s offensive comments, which largely contradicted her professional ethos encouraging female representation in the workforce.

“I am not a surrogate. I am a daughter,” she said at the Most Powerful Women Summit in October, saying she doesn’t share the same political views as her father or the Republican party.

“I stood in front of the RNC and shared that I am an Independent, which is very consistent with many other Millennials and many other people. I am not dogmatically aligned with any party. And I share my thoughts with my father very candidly. But I do dismiss this idea of a surrogate.”

While media organisations around the world continue to audit their election polling systems and analyse just exactly how they called it so wrong, it’s become clear that Trump’s secret weapon to success among women was, and is, Ivanka.

Suburban middle class white female voters were essential in Trump’s Presidential success. They are the type of women who loathe the way Trump spoke about grabbing a woman “by the p***y”, but do appreciate the way his daughter presents herself.

As one Buzzfeed article put it, “Ivanka Voters likely shop at Whole Foods, and go to Pilates, and maybe even admire Michelle Obama”, but they also “do not offer stories of how their fathers, or their husbands, speak to them in a manner similar to Trump.”

“I want to inspire and empower women to architect lives that they love, lives that are uniquely their own and not based on the expectations of anyone other than themselves,” Ivanka said of the initiative, which she hopes will “change the way society thinks and talks about ‘women who work’.

“Raising a daughter, I hope that she grows up to feel empowered to do anything that her brothers can do and to relentlessly pursue her dream.” It’s an admirable cause, but former employees have alleged some hypocrisies – namely that they weren’t granted maternity leave from their positions while under her employ or had to fight tooth and nail to get it.

Before taking on an executive role at the Trump Organisation, Ivanka utilised her family’s high society connections and enjoyed a career as a model – landing gigs with Tommy Hilfiger, Versace and Seventeen and Maxim magazines.

Ivanka’s eponymous fashion line includes accessories, clothing and shoes – most of which are produced in China. She has stepped away from her role at the company to focus on work at the White House, but never shied away from promoting her products throughout the presidential race.

In addition to her supporting role on The Apprentice (2006 to 2015), Ivanka appeared in Born Rich, an HBO documentary in 2003 following privileged children coming from some of the wealthiest families in America including the Bloombergs and Vanderbilts. In it, she gives a tour of her teenage bedroom and allows cameras to follow her into the boardroom, while candidly discussing her parents (Donald and first wife Ivana) highly publicised divorce in 1991 and the difficulty of seeing their split played out in the headlines.

While some of those featured complained of the undue pressure put on them because of their famous lineage, Ivanka said the Trump name is “not a bad shadow to be under”.

In one of the most bizarre friendships in modern politics, Chelsea Clinton and Ivanka managed to stay close throughout the presidential campaign – even as her father was tearing Democratic nominee Hillary Clinton to shreds, telling her his first port of call as president would be imprison her.

“If I win I am going to instruct my attorney general to get a special prosecutor to look into your situation – there has never been so many lies and so much deception,” Trump said at the second presidential debate.

But Ivanka recently revealed she and her “very good friend” Chelsea haven’t spoken since the campaign.

“She’s been a friend of mine long before the campaign, of course will be a friend of mine after,” she told ABC News. “I haven’t spoken about the specific challenges about this next chapter with her just yet but I intend to.”