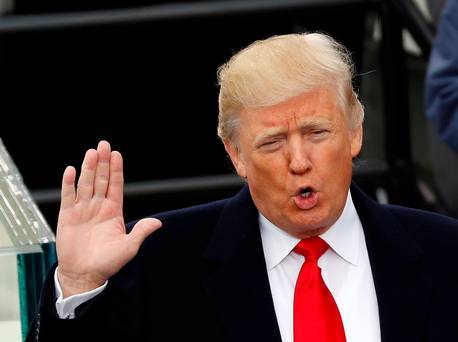 Donald Trump showed signs of anxiety during his inauguration as the 45th President of the United States, a body language expert has claimed.

Trump not only displays a very deliberately paternal and almost John Wayne-like image of to the American public, but also inadvertently leaks his vulnerability, according to Collett.

Dr Collett talked Ryan Tubridy through Trump’s body language signals just ahead of his swearing in as president of the United States.  He focused on Trump’s frequent “puckering” and withdrawal of the chin as a sign of anxiety.

“If I was going to punch you and you knew that was going to happen, it’s very likely you’d pucker up the chin.  It’s essentially an instinctive reaction,” he said.

He explained that it was not only a reaction that anticipated physical attack but also any psychological assault and it showed he was feeling “immensely vulnerable” as he made his way down the White House stairs on his way to the inauguration platform outside.

As Trump made his way outside, Dr Collett drew our attention of Trump’s “peculiar signature smile …his zipped smile”.

“Why zipped?” he continued.

“Because the teeth aren’t exposed at all. Once again we see the chin puckered, he’s not a happy bunny.”

This vulnerability presented a new view of Trump, and indicated a chink in his otherwise solid armour, according to Collet: “He’s constantly projecting this image of himself as a really tough guy, but at the same time, behind that he’s a sort of soft almost vulnerable aspect.”

The truth of Trump’s personality and his future political could have been predicted, according to Collett, but he said we weren’t watching the body language “closely enough”.

“In fact if you do scrutinise his body language you can see the germs of his success; all the things that led to his recent success.  And that was particularly evident in the second presidential debate with Hillary.”

The debate in question was shown in split-screen with Trump on the left and Hillary Clinton on the right.

Dr Collett contrasted the facial signals of both candidates with Trump projecting his “classic alpha-face” with fixed eyebrows, grim, set mouth and slit eyes, while Hillary’s face as wide-eyed with eyebrows raised.

Trump’s image told the American public: “I’m a big guy, I’m a tough guy, don’t mess with me, I can solve all your problems.  I can protect you’.”

Hillary’s body language, however transmitted an unsure message, “almost as though she’s not quite sure what she’s up to”, said Collett.

Pointing to Trump’s face, Tubridy said; “That’s the face of victory”, to which Dr Collett acceded; “It is. That is the macho face of success.”