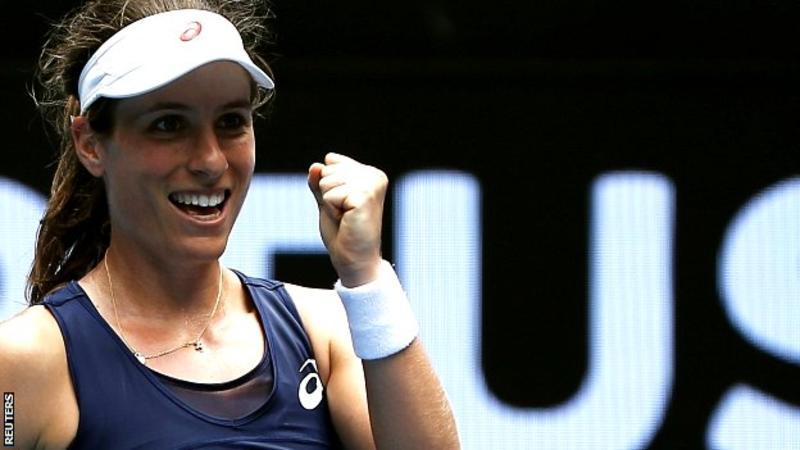 The Briton, 25, made her first Grand Slam semi-final in Melbourne last year.

Asked about facing the 22-time Grand Slam champion for the first time, Konta said: “Believe it or not that’s an incredible experience for me.

“She’s one of the few players still playing who I watched growing up. As a young girl wanting to be a professional tennis player, it’s an incredible honour and I can’t wait to play on court with her.

“Once out on court, against anyone, anyone is out there to compete. Hopefully I’ll come off as the winner.

“In terms of enjoying the opportunity and the competition, I will cherish every minute out there.”

Konta arrived in Melbourne having won her second WTA title in Sydney, the city where she was born, and Monday’s victory over Makarova made it nine matches and 18 sets in a row.

She had needed three hours to beat Makarova at the same stage of the 2016 tournament, but 12 months on the Briton has established herself as a true Grand Slam contender.

Dominant in every aspect of the game, she raced through the first set in just 24 minutes, winning 78% of points on her serve and, even more impressively, 62% on the Makarova serve.

Her constant aggression left the flat-hitting Makarova floundering to get a racquet on the ball much of the time.

Konta’s level dropped in the second set as her first serve deserted her briefly, allowing Makarova to build a 4-1 lead, but the Briton came storming back with five games in a row – closing out the match superbly from 0-40 with two aces along the way.

“I think I came out definitely playing at a higher level than she did but she really put herself back into that match and made it difficult for me,” said Konta.

“The way she pulled away in the second set, I don’t feel like I did much wrong, she started playing some incredible tennis.”

Serena Williams’ coach, Patrick Mouratoglou, picked Konta earlier in the week as a leading threat to his player, and the theory will now be tested when they meet for the first time.

Williams was not at her best in the opening match of day eight on Rod Laver Arena but did enough to see off a feisty opponent in Strycova.

The American six-time champion, 35, fell a break of serve down three times in the first set but came through .

“She’s a really smart player – she can do pretty much everything,” Williams said of Strycova.

“It was a really good match for me and I’m glad I came through it.”

Williams was under pressure on serve more than usual with a first-serve percentage of just 45%.

“It’s good to know I have an plan B or option two,” she added. “I wasn’t serving my greatest but she was also putting a lot of returns in there.”

Mirjana Lucic-Baroni made it through to her first Grand Slam quarter-final since 1999 with a 6-4 6-2 win over American qualifier Jennifer Brady.

The 34-year-old Croat, who went on to lose to Steffi Graf in the Wimbledon semi-finals 18 years ago, did not play a Grand Slam between 2003 and 2010 because of personal issues, but is now back to 79 in the rankings.