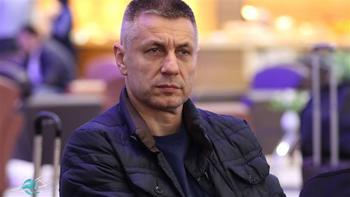 The 47-year-old expressed his and the Bulgarian nation’s heartfelt condolences to the families of the victims of the collapsed Plasco high-rise in downtown Tehran.

Up to 30 people, most of them firefighters, are believed to have been trapped under the rubble of the building, which caught fire on Thursday morning and came down hours later. Rescue teams have so far managed to recover six dead bodies.

During his five-day stay in Tehran, Stoychev is scheduled to engage in negotiations with IRIVF authorities, survey Iran’s volleyball installations and closely monitor a number of the Iranian Volleyball Super League fixtures.

The IRIVF refused to renew the contract of Iran national volleyball team coach Raul Lucio Lozano after the 2016 Rio Olympic Games. Iran finished fifth in the games under Lozano’s tutelage.