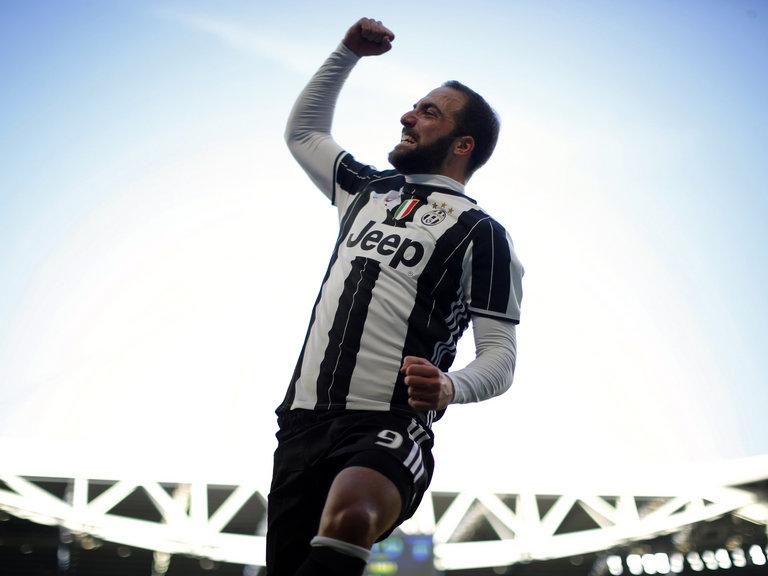 Juventus returned to winning ways on Sunday as early strikes from Paulo Dybala and Gonzalo Higuain steered the Serie A leaders to a 2-0 victory over fourth-placed Lazio.

Dybala notched his fifth league goal of the season five minutes into the contest at the Juventus Stadium with a fine left-footed effort from the edge of the box.

Higuain added his 14th of the campaign 11 minutes later, converting from close-range having met a Juan Cuadrado cross.

Roma later made hard work of keeping up the pressure on the table-toppers as they squeezed past Cagliari 1-0 in the capital thanks to an Edin Dzeko goal.

The Bosnian’s 55th-minute strike ensured the Giallorossi remain within a point of Juve, who have a game in hand, while Joao Pedro was sent off for Cagliari.

Autumn underachievers Inter Milan made the most of Lazio’s defeat, and AC Milan’s home loss to third-placed Napoli on Saturday night, by moving up to fifth with a 1-0 win at Palermo.

Substitute Joao Mario’s 65th-minute goal proved to be the difference between the sides, who both lost a man to a red card. Cristian Ansaldi saw red for Inter in Sicily before Palermo midfielder Alessandro Gazzi followed him down the tunnel in stoppage time.

Atalanta remain in contention for Europa League football after beating lowly Sampdoria 1-0 thanks to Alejandro Gomez’s second-half penalty in Bergamo.

Torino slipped down the table following a 2-0 defeat at improving Bologna, for whom Swiss midfielder Blerim Dzemaili scored twice.

Alessandro Matri opened and closed the scoring at Pescara as Sassuolo pulled away from relegation danger on the back of a 3-1 victory.

Former Juve striker Matri managed to net inside a minute and it was not until the 56th minute that Jean-Christophe Bahebeck pegged the Neroverdi back. Lorenzo Pellegrini promptly gave the visitors the lead once again and Matri confirmed the outcome with 17 minutes remaining.

Cristiano Biraghi might have lessened the impact of the defeat, but he missed a last-gasp penalty.

The result leaves Pescara propping up the table with only nine points from their 20 games thus far, and the bottom three risk being cut adrift completely.

Last year’s Serie B runners-up scrapped to secure a fourth draw of the term, with Gianmarco Ferrari’s goal forcing a 2-2 draw at Genoa.

Crotone had gone 1-0 down just before half-time as Giovanni Simeone – son of Atletico Madrid boss Diego – grabbed his eight goal of the campaign.

Federico Ceccherini gave the promoted side fresh hope only for Lucas Ocampos to convert a spot-kick, leaving Ferrari to salvage a rare point for Crotone.

On Saturday, Napoli extended their unbeaten run in Serie A to 10 games with a 2-1 victory over AC Milan at San Siro.

Maurizio Sarri’s side stormed out of the blocks and were two goals up within the opening nine minutes.

The Rossoneri secured a route back into the game seven minutes before half-time when Juraj Kucka scored from 15 yards.

Mario Pasalic then headed against the bar moments after half-time as AC Milan looked to maintain their own slim title hopes.

Fiorentina maintained their quest for Europe with a resounding 3-0 victory at Chievo.

Paulo Sousa’s side beat Juve last time out and they picked up where they left off at Stadio Marc’Antonio Bentegodi to move up to eighth.

Cristian Tello got Viola off and running in the 18th minute before Khouma Babacar doubled the visitors’ lead seven minutes after half-time.