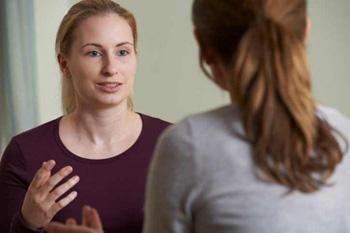 Cognitive behavior therapy is used to help treat a number of mental health conditions, including anxiety, depression, and post-traumatic stress disorder. For the first time, researchers have shown how this type of therapy triggers brain changes to produce long-term benefits for patients with psychosis.

According to the National Institute of Mental Health (NIMH),psychosis describes a set of symptoms “where there has been some loss of contact with reality.”

Such symptoms include delusions, hallucinations, and confused and disturbed thoughts, and they are often the result of mental illness, such as schizophrenia or bipolar disorder. However, psychosis can also be triggered by other factors, including sleep deprivation and alcohol or drug abuse.

Each year, around 100,000 adolescents and young adults in the United States experience a first psychotic episode, and approximately 3 percent of the U.S. population will experience psychosis at some point in their lives.

Cognitive behavior therapy (CBT), also termed “talk therapy”, is a form of psychotherapy used to treat psychosis and other mental health conditions. It focuses on changing the thinking and behavior that might be fueling such conditions.

Past research has suggested that CBT is effective for reducing symptoms of psychosis, and in a previous study, Dr. Mason and colleagues found that CBT can strengthen connections in certain brain regions of patients with psychosis.

The researchers built on this finding with their new study, which suggests that the brain connections strengthened by CBT may lead to long-term recovery from psychosis.

In their first study, published in the journal Brain in 2011, 22 patients with schizophrenia-related psychosis underwent CBT.

Six months before and after CBT, Dr. Mason and team used functional MRI to analyze the brain activity of each participant as they viewed pictures of faces expressing various emotions.

Compared with the medication-only group, the participants that received both medication and CBT showed stronger connections in numerous regions of the brain, including those related to emotion.

For the new study, Dr. Mason and team used medical records to assess the monthly health of 15 of the 22 participants in the 8 years following CBT.

Subjects also completed a questionnaire that asked them about their recovery from psychosis 8 years after receiving CBT, as well as their overall well-being.

Furthermore, the team found that the subjects who showed stronger connections in specific brain regions directly after receiving CBT – particularly in the amygdala and the frontal lobes – had higher psychosis remission rates over the subsequent 8 years.

The amygdala is the brain region associated with the processing of emotions such as fear, while the frontal lobes play a role in thinking and reasoning.

Overall, the team believes these findings indicate that CBT can trigger brain changes that lead to long-term recovery from psychosis. The authors write:

The present findings extend this work by providing initial evidence that it is the degree to which this reorganization takes place that determines sustained gains in the long-term recovery of people with psychosis. This justifies further work utilizing this novel methodology on a larger scale.”

According to Dr. Mason, the study results also challenge the common perception that brain changes that arise in mental health disorders may not be fully treatable with psychotherapies.

The team now plans to conduct larger studies with the aim of confirming their current findings, as well as identifying brain changes that can distinguish between individuals who do and do not respond to CBT.