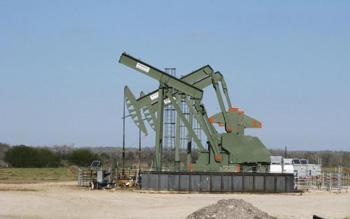 Oil ticked lower on Monday, falling for the first time in three sessions as prospects of rising U.S. production weighed on the market.

U.S. energy companies last week added the most rigs drilling for new production in almost four years. Drillers added 29 rigs in the week to Jan. 20, bringing the total count up to 551, the most since November 2015, energy services firm Baker Hughes (BHI.N) said on Friday.

U.S. oil production has risen more than 6 percent since mid-2016, although it remains 7 percent below a historic high in 2015. It is back to levels of late 2014, when strong U.S. crude output contributed to a crash in oil prices.

Brent crude LCOc1, the international benchmark for oil prices, was trading at $55.42 per barrel at 0441 GMT, down 7 cents from its last close. U.S. West Texas Intermediate (WTI) crude futures CLc1 fell 11 cents to $53.11 a barrel.

Crude oil had traded higher earlier in the session on the back of output cuts by OPEC and other producers.

Production cuts by oil producers and a weaker dollar prevented the market from dropping further.

OPEC and non-OPEC countries have made a strong start to lowering their oil output under the first such pact in more than a decade, energy ministers said on Sunday as producers look to reduce oversupply and support prices.

Ministers said 1.5 million of almost 1.8 million barrels per day (bpd) had already been taken out of the market.

“In the medium term it is going to be tough for oil to break out. The more oil goes up, the more these shale drillers are going to hedge by the futures.”

On the technical front, Brent may climb up to $56.55 per barrel, as it has cleared resistance at $55.43, according to Wang Tao, Reuters analyst for commodities and energy technicals.

The U.S. dollar fell against the euro and yen on Tuesday after a drop in oil prices suggested U.S. inflation would stay low and prevent the Federal Reserve from hiking interest rates at a steady pace this year. Risk aversion also boosted the euro and yen. [USD/]