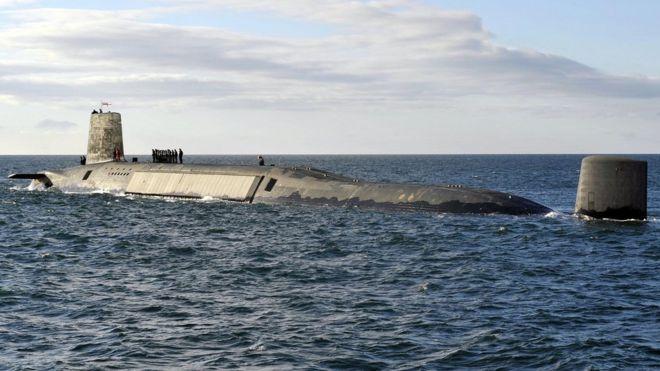 Labour and the Scottish National Party are urging the government to give a full explanation to MPs on how a test firing of a Trident missile went wrong.

The unarmed missile reportedly veered off course a few weeks before MPs voted to renew the nuclear weapons system.

The Ministry of Defence says submarine HMS Vengeance and its crew were “successfully tested”.

Shadow chancellor John McDonnell said it was “extremely worrying” Parliament had not been told of June’s incident.

Nia Griffith, Labour’s shadow defence secretary, is calling for the prime minister to give “a full explanation” to MPs later.

Meanwhile, Scottish First Minister, Nicola Sturgeon – a long-standing opponent of Trident, whose submarines are based at Faslane, on the River Clyde – said the apparent misfire was a “hugely serious issue”.

The SNP leader tweeted: “There should be full disclosure of what happened, who knew what/when, and why the House of Commons wasn’t told.”

HMS Vengeance, one of the UK’s four Vanguard-class submarines, returned to sea for trials in December 2015 after a £350m refit, which included the installation of new missile launch equipment and upgraded computer systems.

According to the Sunday Times, the unarmed Trident II D5 missile was intended to be fired 5,600 miles (9,012 km) from the coast of Florida to a sea target off the west coast of Africa – but veered towards the US.

In July, days after Theresa May had become prime minister following David Cameron’s resignation, MPs backed the £40bn renewal of Trident by 472 votes to 117.

During the debate, Mrs May told MPs it would be “an act of gross irresponsibility” for the UK to abandon its nuclear weapons.

But all 52 SNP MPs voted against it – as did 47 Labour MPs including party leader Jeremy Corbyn.

Questioned by the BBC’s Andrew Marr on Sunday, Prime Minister Theresa May refused to say four times if she had known about the test firing ahead of the vote.

Mrs May said: “I have absolute faith in our Trident missiles. When I made that speech in the House of Commons, what we were talking about was whether or not we should renew our Trident.”

Mr Corbyn said the reports called for “a serious discussion”.

He told Sky News: “It’s a pretty catastrophic error when a missile goes in the wrong direction.”

Kate Hudson, general secretary of the Campaign for Nuclear Disarmament, said: “There’s absolutely no doubt that this would have impacted on the debate in Parliament.”

Admiral Lord West, the Labour peer former First Sea Lord, said it was “bizarre and stupid” to not tell anyone about the test.

But Rear Admiral Chris Parry, a former Royal Navy officer and Nato commander, told the BBC: “Quite a lot of these shots nowadays are being done to test the limits of the system, so that we can get the next generation of ballistic missiles in…

“It may well be that they were testing this missile close to its flight limits, so they could see where it wasn’t going to work.”

A statement issued by Downing Street and the MoD said the capability and effectiveness of Trident was “unquestionable”.

“In June the Royal Navy conducted a routine, unarmed Trident missile test launch from HMS Vengeance, as part of an operation which is designed to certify the submarine and its crew.

“Vengeance and her crew were successfully tested and certified, allowing Vengeance to return into service. We have absolute confidence in our independent nuclear deterrent.”

The Trident system was acquired by the Thatcher government in the early 1980s as a replacement for the Polaris missile system, which the UK had possessed since the 1960s.

Trident came into use in the 1990s. There are three parts to it – submarines, missiles and warheads. Although each component has years of use left, they cannot last indefinitely.

The current generation of four submarines would begin to end their working lives some time in the late 2020s.