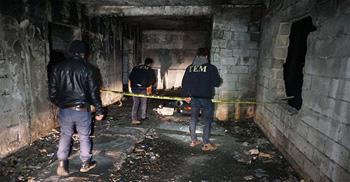 Police have killed a suspected DHKP-C member who allegedly conducted rocket attacks on police and Justice and Development Party (AKP) buildings in Istanbul on the evening of Jan. 21, state-run Anadolu Agency has reported.
Police launched an operation in the Muratlı district of the northwestern Tekirdağ province to find Bilgehan K., who allegedly staged the attacks on the Istanbul provincial police headquarters and an AKP building in Beyoğlu district.

The suspect, who was on the Interior Ministry’s wanted list, was reportedly killed in a clash in a rural area of the district.

Earlier on Jan. 22, a man also suspected of being involved in the twin rocket attacks in Istanbul was apprehended during a police operation, a security source said.

Şerif T., reportedly a member of the ultra-left Revolutionary People’s Liberation Party-Front (DHKP-C), was arrested in Tekirdağ, the source said on condition of anonymity due to restrictions on talking to the media.
Security forces raided 15 locations across Istanbul, and arrested five people over suspected links to the attackers.

Istanbul Gov. Vasip Şahin said on Twitter on Jan. 20 that no one was injured in the attack on the police headquarters and that an investigation had been launched.

He told reporters later that the rocket had pierced the wall of the building but did not explode, and pointed to the potential involvement of the DHKP-C.

He also said two assailants were involved in the attack.