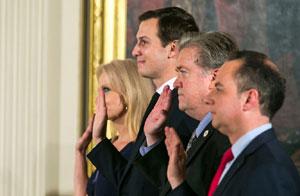 WASHINGTON — President Trump’s first weekend in office unfolded much the way things often did during his campaign: with angry Twitter messages, a familiar obsession with slights and a series of meandering and at times untrue statements, all eventually giving way to attempts at damage control.

The problem is that what works on the way to the White House does not always work once a candidate gets there.

To the extent that there was a plan to take advantage of the first days of his administration, when a president is usually at his maximum leverage, Mr. Trump threw it aside with a decision to lash out about crowd sizes at his swearing in and to rewrite the history of his dealings with intelligence agencies.

The lack of discipline troubled even senior members of Mr. Trump’s circle, some of whom had urged him not to indulge his simmering resentment at what he saw as unfair news coverage. Instead, Mr. Trump chose to listen to other aides who shared his outrage and desire to punch back. By the end of the weekend, he and his team were scrambling to get back on script.

New presidents typically find the adjustment from candidate to leader to be a jarring one, and Mr. Trump was not the first to get drawn into the latest flap in a way that fritters away whatever political good will comes with an inauguration. Former President Bill Clinton got off to a tough start by engaging on issues that were not central to his agenda, most notably gays in the military, and took a while to learn how to focus on his highest priorities.

But Mr. Clinton showed none of the combativeness and anger of Mr. Trump.

“The adjustment from private citizen to running the country is unbelievably hard,” said Dan Pfeiffer, a longtime adviser to former President Barack Obama. He said that what people, even new presidents, often fail to fully understand “is that after you stand out there in the weather and take the oath of office in front of an adoring crowd, you walk into that building and you are in charge of the free world.”

At first, at least, Mr. Trump seemed to be resisting the notion that he should adjust his approach now that he is in office. After all, his pugilistic style was a winning formula, one that got him to 1600 Pennsylvania Avenue in the first place. Many of his supporters cheer him taking on the establishment. And some allies said any blowback would not matter long anyway.

“Ultimately this is about governing,” said former House Speaker Newt Gingrich, who has advised Mr. Trump. “There are two things he’s got to do between now and 2020: He has to keep America safe and create a lot of jobs. That’s what he promised in his speech. If he does those two things, everything else is noise.”

“The average American isn’t paying attention to this stuff,” he added. “They are going to look around in late 2019 and early 2020 and ask themselves if they are doing better. If the answer’s yes, they are going to say, ‘Cool, give me some more.’”

That is the long view and ultimately perhaps the most important one. The short view from many political professionals is that Mr. Trump’s debut was not a success. The president himself seemed to be trying to find a way forward as the weekend proceeded. He danced to “My Way” on Friday night and did it his way on Saturday, but by Sunday he seemed to be trying something different.

A day after waves of opponents gathered in Washington and cities around the nation and world to protest his presidency, Mr. Trump began Sunday still in a mood to push back.

“Watched protests yesterday but was under the impression that we just had an election!” he posted on Twitter in the morning. “Why didn’t these people vote? Celebs hurt cause badly.”

Kellyanne Conway, his counselor, contributed to the combative mood in an interview with NBC’s Chuck Todd when she described the falsehoods that the White House press secretary, Sean Spicer, had told reporters Saturday night as “alternative facts” — an assertion that lit up Twitter.

However, Mr. Trump later adopted the more above-it-all demeanor that presidents typically take. “Peaceful protests are a hallmark of our democracy,” he wrote on Twitter. “Even if I don’t always agree, I recognize the rights of people to express their views.”

Mr. Trump faces a challenge few of his predecessors have confronted. Having won an Electoral College victory but not the popular vote, he entered office with less public support in the polls than any other president in recent times. After a transition in which he did relatively little to reach out to his opponents on the left and they hardly warmed to him, he found hundreds of thousands of protesters chanting just a few blocks from his new home on the first morning he woke up there.

That has left the new White House feeling besieged from Day 1, fueling the president’s grievances and, in the view of some of his aides, necessitating an aggressive strategy to defend his legitimacy. “The point is not the crowd size,” Reince Priebus, the White House chief of staff, said on “Fox News Sunday” before the mood began to soften. “The point is that the attacks and the attempts to delegitimize this president in one day — and we’re not going to sit around and take it.”

Mr. Trump grew increasingly angry on Inauguration Day after reading a series of Twitter messages pointing out that the size of his inaugural crowd did not rival that of Mr. Obama’s in 2009. But he spent his Friday night in a whirlwind of celebration and affirmation. When he awoke on Saturday morning, after his first night in the Executive Mansion, the glow was gone, several people close to him said, and the new president was filled anew with a sense of injury.

He became even more agitated after learning of a pool report by a Time magazine reporter incorrectly reporting that a bust of the Rev. Dr. Martin Luther King Jr. had been removed from the Oval Office. (The reporter, Zeke Miller, did not see the bust and, after realizing the error, quickly issued a correction and apology.)

While Mr. Trump was eager to counterattack, several senior advisers urged him to move on and focus on the responsibilities of office during his first full day as president. That included a high-stakes trip to the headquarters of the Central Intelligence Agency, where he had been coached to demonstrate support of the agency and criticize Senate Democrats for delaying confirmation of his nominee to lead it, Mike Pompeo. The advisers left thinking he agreed.

But Mr. Spicer, who often berated reporters for what he called biased coverage during the campaign, shares Mr. Trump’s dark view of the news media and advocated an opening-day declaration of war.

After racing through his words of reconciliation at the C.I.A. in Langley, Va., Mr. Trump launched into a rambling, unscripted discussion that drifted to the topic of crowd size, making a series of verifiably false claims. Mr. Spicer then went to the White House briefing room for his first turn at the lectern and issued a blistering attack on reporters, made his own false claims and then stormed out without taking questions.

Some of the president’s supporters found the first weekend troubling. L. Lin Wood, a prominent libel lawyer who was a vocal defender of Mr. Trump’s on Twitter during the campaign, said that he considered it a dangerous debut.

“To someone who believed we might have a good opportunity to change, it’s just a terrible start. Because he’s got a long way to go,” Mr. Wood said. “This is going to go downhill quickly if it’s not changed, and that’s not good for any of us.”