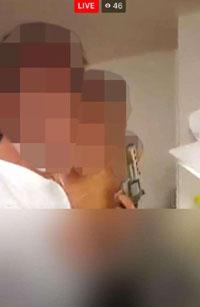 POLICE are reportedly investigating the suspected gang rape of a woman after the three-hour attack was live-streamed on Facebook.

The Sun reports an online witness said the victim had her clothes pulled off by armed men and was sexually assaulted before cops arrived and turned off the camera in Uppsala, Sweden.

According to Swedish tabloid Aftonbladet, three people have been arrested after the alleged attack was broadcast in a closed Facebook group on Sunday night.

Police rushed to the apartment after they were tipped off by someone watching the live stream in horror. The victim was apparently close to unconscious as she was assaulted.

Witness Josefine Lundgren, 21, called the police immediately when she tuned into the live footage.

She told Sweden’s Expressen: “He pulled her clothes off and lay on top of her.”

A few hours later she saw a uniformed policeman interrupt broadcast as he arrived at the scene. He confronted the men and demanded they come to the station before shutting off the webcam.

Another person watching the stream told the paper: “I first thought it was a poorly orchestrated joke.

A former member of the closed group told Expressen: “The first thing you think is ‘how can you do such a thing to a girl? And how can you do it live when you know that you are going to go there?’”

“I think of course it is screwed, totally sick,” they added.

Regional police have begun an investigation and the apartment is being examined by forensic scientists.